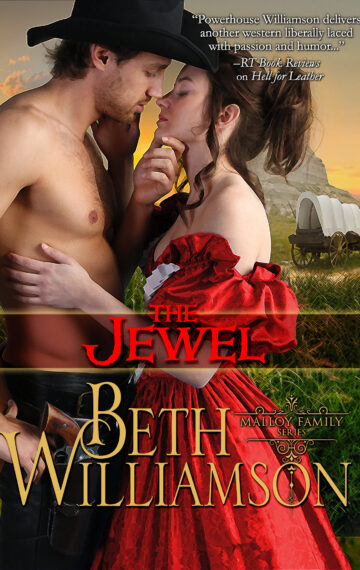 Isabelle Chastain is the “beautiful” sister, one who is rarely taken seriously because of her looks. She has struggled all her life to overcome people’s first impressions, yet it continues as her family immigrates to the Oregon territory.

Mason Bennett left North Carolina and his lucrative college teaching role to head west, to capitalize on the newly found gold in the California territory. Dazzled by the potential find, he believes his friend’s stories of a claim that will bring them millions. He comes to regret the decision when he is robbed, beaten, stripped and left for dead.

Isabelle doesn’t expect to find a naked man bleeding to death in the dirt, but she cannot leave him to die. She heals him while heading east, desperate to find the remnants of her family. When their wagon is hijacked by a family of vagabonds, their lives take a hard right turn.

Together, Isabelle and Mason band together to save themselves, save Charlie, and find the future filled with the happiness they’ve been chasing.

Mason Bennett hit the ground hard enough to make his teeth clack together. He skidded across the dirt, the rocks and sticks tearing at his skin. After what seemed like an hour, but was probably ten seconds, he slammed into a small mound and stopped.

He lay there, unmoving. The fall had stripped his lungs of air and probably two feet of skin. He waited for the sound of gunshots, but none came. Minutes ticked by while every inch of his body let him know exactly what injuries had occurred. The horses rode away and he strained to hear every sound until he heard nothing. Thank God they had believed his ruse.

Or rather, not quite a ruse. While he needed to play dead, he thought he might actually be half-dead. He was most assuredly naked. The sun rose and the morning grew warm and he lay there, unmoving and full of pain.

He could be thankful they hadn’t shot him through the heart after they’d throw him from the horse. But thankful was the last emotion on his mind. Sons of bitches had taken everything except his life. No, he was angry and a wee bit vengeful.

Time slowed to a crawl as he lay there, the sun rising higher into the sky and baking his raw skin. Flies and other manner of multi-legged critters found him lying prone and thought to stay awhile. He could die. Right here. Right now. A sobering thought.

Hours passed in his pit of misery in the dirt before the sound of a wagon and oxen reached his ears and he managed to lift one arm. He waved it back and forth to get someone’s attention. Being naked, dirty and bloody might be a deterrent from whoever might actually see his pitiful wave. Yet he had to try.

“Iz, did you see that?” A young girl’s voice drifted across the tall grass.

He mumbled something that may have been “thank you”, but the dirt cloud entered his mouth, ceasing intelligible speech. How could he have stooped to the point he was left to rot like a piece of refuse? He should be back in North Carolina teaching, but no, he was here in the middle of nowhere, hurt, penniless, naked and alone.

Oh, how far he had fallen.

“Stop the wagon. Hell and damnation, Iz, you are gonna run over the body.”

Body? Whose body? His body? Mason tried to move, but he managed to only grunt and flail his arm some more. He hoped the foul-mouthed girl would find him.

The jangle of harnesses preceded the crunch of the wheels on the hard-packed earth. Another puff of dirt hit his face and he attempted to duck his head and avoid the worst of it.

“Oh good, you didn’t run over his head.”

He was quite happy about that.

“Do not get too close, Charlie. He could be armed.” This was a new voice, one that danced across his ears. Beautiful, dulcet tones that could only belong to an angel.

“Uh, no I don’t think he’s armed, Iz.” The young voice grew closer and a pair of women’s boots, scuffed and worn, stopped in front of him.

“How do you know that? He could have it hidden in his trousers.”

A freckled face appeared in his line of vision, upside down, and frowning. “He ain’t wearing trousers, or any clothes for that matter. Plus he’s all beat up and bloody.”

“What do you mean he isn’t wearing clothes? Are you saying the man is naked?” Another thump and rapid footsteps. “Sweet heavens.”

“I told you.” The young face moved closer, her brown eyes clear and intelligent. “Why are you naked, mister?”