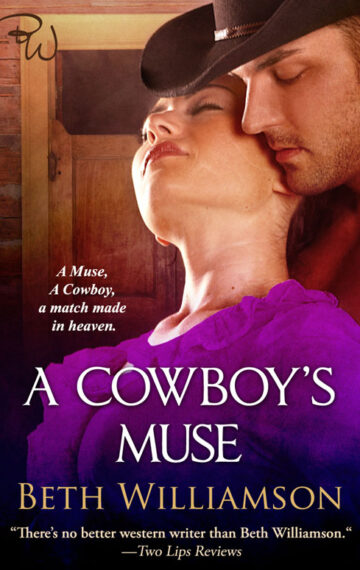 Clio is not only the muse of history, she has virtually lived her life through books. When a lightning strike sends her through space and time, Clio finds herself in the Old West with no way of getting home and none of her powers. Relying on her book learning is not working out like she’d hoped.

Ace Nevada is an unwilling sheriff who has spent the last year trying to get out of town. When a crazy woman lands in the horse trough in front of a saloon, he finds himself strangely attracted to her. He can’t help himself from sampling her lips or her incredibly lush body.

Clio learns how to be human and Ace remembers what it is to be human. They are two halves of the same whole. Mates. When Clio’s powers return, will their love pass the test of time?

Ace shifted uncomfortably in his trousers. As she called herself a goddess she pushed out those incredible tits right next to him. He could barely concentrate on the ham in front of him, let alone remember the taste of anything at dinneróexcept the taste of her scent. She was scrubbed clean and smelled fresh, like soap, and woman.

He had no idea where Clio had come from, but it was evident obviously she didnít even know how to cut her own meat. Maybe she was some kind of princess, had servants or slaves or something to fix her plate for her. She was a crazy mix of innocence and sexiness that had him dangling like a catfish on a hook.

He sat on the porch after supper and smoked one of his favorite cigars. The tip glowed amber in the summer night. The sound of katydids, frogs and whippoorwills echoed through the darkness. It was peaceful. The screen door behind him opened and he felt himself harden all over again.

Without looking, he knew it was Clio even before she sat down beside him on the step. His body recognized hers, like two magnets that couldnít stay apart. She fluffed out her skirt and smoothed the material like she was wearing a fancy getup at a ball. He chuckled and she stopped.

ìNope, you just confuse the shit outta me lady. One minute you talk like a book, the next you act loco. Where are you really from, Clio?î

Clio laced her fingers together and rested her arms on her knees. ìI told you. Mount Olympus.î

As she nodded he heard her braid switch up and down her back. Her hair was enough to keep him up for two weeks. Just the thought of having it wrapped around him, everywhere. Hell, he couldnít stop a shudder from racing through him. He needed to get laid.

ìYes, he is. You see, my mother isnít married to himóhe had nine daughters with her. My sisters and I are all goddesses.î

Lord Jesus, there were eight more of her? His mind hurt trying to imagine so many of them.

ìWhere are they now? Your sisters, I mean?î He tried to keep his mind, and his cock, on what she was saying.

ìHome I suppose. They likely donít even know I am here in Peyote.î She sounded wistful and he heard the love in her voice for her family.

ìDo you think theyíre looking for you in Texas? I could put out a wire to the other sheriffs to keep their eye out for them,î he offered, figuring it was the least he could do.

Before he could stop her, she had wrapped her arms around his neck and planted a kiss on his lips. His entire body reacted like it had been dipped in dynamite. He grabbed her and pulled her onto his lap, her nicely-rounded derriere sitting like a delicious piece of heaven on his aching staff. Her soft curves snuggled in like they belonged there. He wrapped his arms around her and those tits pressed into his chest. Groaning low and deep in his throat, he cupped the back of her head as he flicked his tongue along her lips.

Just as her mouth opened and Ace knew heíd get this little goddess into his bed, the door swung open behind him and Hurricane Maybelle swept out onto the porch.

Ace pushed Clio off his lap back onto the step where she landed with a thump. ìShe kissed me, Maybelle.î

Maybelle snorted. ìAnd Iím the Queen of England. Clio! Get yourself back in this house!î

Clio jumped up and darted into the house. He waited for the rest of it. Maybelle smacked him across the back of his head and ended his waiting.

ìLeave that girl alone, Ace. She ainít quite right in the head and she donít need a smooth-talker like you ruffling her drawers.î

With one last smack, Maybelle went into the house behind his goddess. Ace cursed his luck. It would be a long time before he slept that night.