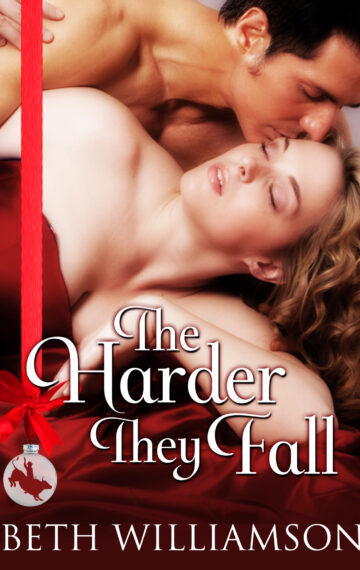 The bigger they are, the harder they fall…

TJ Maguire runs her father’s successful rodeo business, and is busily trying to wrap up the final rodeo of the season. When a disqualified cowboy tries to bully, intimidate, wheedle, whine, bribe, and finally to romance her into changing her mind, she does her best to ignore him. But it’s so very hard to do, nearly as hard as his body. He’s a helluva man in a long, tall package that sets her palms to itch and her body on fire. When they end up in bed together, the sheets aren’t the only things that burn. Will TJ listen to her head or her heart?

If Hank doesn’t compete in the all-around in the rodeo, he can’t compete in the nationals in Vegas. That’s a damn big purse to pass up for anyone. Intending to seduce TJ into changing her mind, Hank ends up being seduced instead. He discovers that TJ may be an even bigger prize than he ever imagined. Will Hank pursue his rodeo dream or give in to the heaven he finds in her arms?

TJ was looking for Charlotte’s number when the door to the trailer opened with enough force to practically rip it off the hinges. The huge man she’d knocked over filled the doorway, literally, as he ducked to enter.

She’d always thought it was a good-size trailer, but this man made it seem really, really small. There was fire coming out of those beautiful blue eyes and she had a sneaking suspicion he was pretty pissed. At her.

“Look, mister, I said I was sorry. How about I give you a couple of free tickets to the rodeo?”

That apparently just pissed him off even more. She was surprised smoke wasn’t coming out of his ears.

He reached into his back pocket for something. His shirt stretched across one of the most incredible chests she’d ever laid eyes on. She could actually see the outline of his muscles through his shirt. All muscle, all lines, all delicious. My, oh, my.

“You sent me this disqualification letter for the calf roping event. You need to un-disqualify me. Now.”

He opened the paper up, then threw the letter down on her desk with a flick of one mighty hand.

TJ’s perusal of his chest ended abruptly. She looked down at the familiar-looking letter and decided that perhaps he needed a lesson in manners. He had obviously forgotten how to speak to a lady.

She rose to her full height of five feet eleven inches and gave him her famous icy glare. More than one cowboy had turned tail and run at the sight of it.

“Look, whoever you are, you can’t just barge in here—”

“The name is Hank. Hank Beltane.”

He’d interrupted her! A crime at the top of her list of pet peeves.

“Okay, Hank. You can’t just barge in here and demand I remove a disqualification. There is always a reason for a disqualification, and I follow the rules. To. The. Letter. I will not change my mind simply because you want me to.”

She poked her manicured pink fingernail into his rock-hard chest. The wisps of blond hair sticking out the top of his shirt seemed to be calling her, waving in the breeze from the air conditioner.

Was the damn A/C actually working?

One of those large, callused hands closed over her finger. Suddenly Mr. Bully was gone and Mr. Suave took his place.

“Hey, little darlin’, no need to get in an uproar. We can settle this friendly like. How about we go out to dinner and talk about it? There’s a great Italian place in Santa Estrella.”

Then he smiled and holy shit and crackers. Those pearly whites, that tanned skin. Good thing she was immune to cowboys’ charms because this one could do her in.

“Sorry, I’m busy.” She waved one hand toward the door. “Don’t let the door hit you in the ass on the way out.”

She sat back down and tried to ignore him. It wasn’t an easy task. It became even harder when she realized that, after she sat down, she was eye level with his crotch. Unless he was stuffing socks in his tighty-whities, he had one large package to deliver. She remembered her first reaction—a man and a half. Easily. Perhaps even a man and three-quarters.

While she tried to take her eyes off his fabulous accouterments, he leaned down and planted his hands on her desk. They nearly covered the blotter. They must be the size of dinner plates. Was there anything on him that wasn’t super-sized?

“We have a problem, TJ. What kind of a name is that for a girl, anyway?”

“None of your business. Now get out.”

He shook his head. That’s when she realized he had a ponytail. A long, blond ponytail that reached his ass. She had a sudden mental image of his hair sliding down her nipples as he kissed his way to her…

“Are you listening to me?”