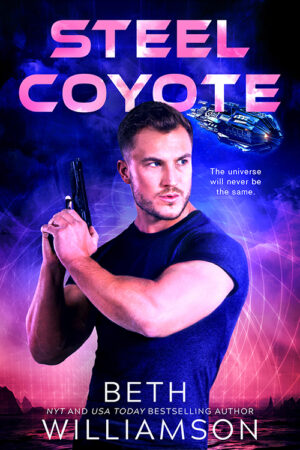 The universe is a tough place to make it as a female cargo ship captain, and Remington Hawthorne fights every day to scrape by. A sketchy deal goes south, and although she doesn’t want anyone else to touch her ship, she’s forced to accept help from the stranger who calls himself Max Fletcher. He’s hot. And he’s trouble. Big trouble. But she’s out of time, out of money, and every crooked cartel is on her tail.

Max Fletcher has spent his life running from his past. So he has no idea what makes him offer to bail out tall, gorgeous, sassy Remy when she needs a pilot to get her illegal cargo to its destination—the last place in the universe he ever wanted to land again.

One thing’s for sure, it’s gonna be a helluva ride.

Growing up, Remy’s temper had landed her in trouble enough times that she generally kept a tight hold on the reins. Something about Max Fletcher loosened her control and made her emotions bubble to the surface.

This time, she didn’t care if she was sweaty and flushed. She walked with her arms swinging, anger fueling her speed. A few people tried to sell her their wares but she waved them off and concentrated on reaching the ship. Her stomach jumped and she had to swallow back bile at least twice. There was no time to be weak or let anxiety take over. Tomorrow, they would have cargo and money to buy fuel and supplies. She was tired of eating dried food she couldn’t identify. Pitiful as it was, she ached to eat a piece of real fruit.

That all hinged on the fact Cooper thought she’d hired a pilot.

He was still behind her. She could feel him and hear him greeting the people she’d walked past. Damn him.

Much as she didn’t want to face it, the truth of it was, she was stuck. She needed him to get the cargo, and Cooper might want to see them take off together to seal the deal. She didn’t want to allow Fletcher to step foot on board but common sense told her that she was going to have to.

When she finally reached her ship’s berth her anger had cooled. Foley sat on a metal crate, the ramp wide open. The old curmudgeon had been her father’s chief engineer. Now that his eyesight was failing, he did maintenance around the ship, keeping things oiled, tightened, and clean. The grizzled beard hid a gaunt face. Foley had lost a great deal of weight and Remy suspected he was sick. If only she could convince Foley to accept a healer’s touch.

He wore the same navy-blue shirt and trousers he’d had for as long as she could remember. One day she might dare herself to check his quarters to see if he had dozens of the same outfit. Perched on what was left of his halo of frizzy white hair sat a black hat that had seen better days. A bullet hole graced one side and stains of unknown origin decorated most of it. A tiny blue earring was pinned in the center. She’d never asked him where it came from, but suspected it had been a woman from his past. In her twenty-one years, she’d never seen him with one, so perhaps this was the one who’d set him on the course of bachelorhood.

“Well met, Cooper.” She sucked in a much-needed breath.

“Well met, Captain.” Foley pointed his favorite knife at a spot behind her and squinted. “Who’s that?”

Remy stopped and put her hands on her hips.

She didn’t have a choice and that was the bald truth. Pride was one of her biggest flaws, and it didn’t go down easy when she had to swallow it. But for her untraditional family, she would do what she needed to. She took a deep breath and accepted what the universe decided to throw in her path.

“Looks like a pretty boy to me.” Foley snorted. “The boy ain’t even got dirt under his nails.”

“Well met, good sir.” Fletcher huffed a laugh. “I can see good hygiene is not of particular concern.”

“Shut up both of you.” Remy shook her head. “Foley, stop taunting him. Fletcher, stop being an asshole.”

She turned to look at them posturing like a couple of bantam roosters they’d carried a few times in the cargo hold. Male creatures were foolish. And annoying.

“I ain’t gonna like him. Doesn’t even carry a gun.” Foley used his knife to scrape at his filthy nails.

“What makes you think I don’t have a gun?” Fletcher’s smile was a slash of white, and not at all friendly. “I don’t like to wear a holster on my hip, but that doesn’t mean I’m not armed.”

“Well met, Remy. Glad you’re back. Who is this?” Katie strolled up, hands in her pockets and a friendly smile on her face. “You picking up strays?”

“Unfortunately, we have to. Katie, Foley, this is Max Fletcher.” Remy waved her hand in the general direction of the man. He opened his mouth to likely say something charming, but she cut him off. “I couldn’t get the job from Cooper unless Fletcher was at the helm. Apparently, my experience and reputation aren’t good enough.”

“Cooper will be here at five. Let’s get the ship ready.” She waited while the three of them sized each other up. “Or I can fire all of you, sell the ship, and live the rest of my life with pretty boys feeding me hydroponic grapes.”

“Fine, but I ain’t gonna like him.” Foley levered himself up out of the chair with a creak of his old bones. “I’ll inventory our supplies and get fresh water in the tanks. Make sure this one stays out of my way.”

Katie shook her head. “Can’t wait to hear this story. In the meantime, I’ll make the engine ready and arrange for fuel to be delivered.” She raised her eyebrows at Remy. “This is going to be an interesting trip.”

Once her engineer bounded back into the ship, Remy was alone with Fletcher again. She didn’t want him there, didn’t trust him. But she had to do what she must to save the Steel Coyote.

“What do you want me to do?” His deep voice sizzled over her already tight nerves.