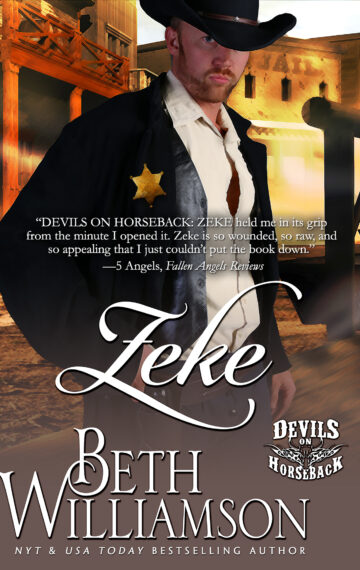 A cool man, a fiery woman, a love destined to ignite.

Intense, reserved and known for his strategic thinking, Zeke Blackwood has struggled to find his place in the post-war world. After the violent death of the first woman to capture his heart, Zeke retreats into a whisky bottle—until he’s handed the position of town sheriff.

Zeke sobers up and tries his damnedest to be the best lawman he can be. He hadn’t counted on the tempting new saloon girl to jeopardize his cold, unhappy existence.

Naomi Tucker is a survivor, a woman who made it through the war on her own wit and strength. She hoped moving to Tanger, Texas would bring her the peace and stability she yearns to find. Instead she runs head-on into a cool-eyed sheriff who welcomes her to his bed, only to push her away.

The wildness of the West is far from tamed. It threatens the town’s efforts to rebuild, Zeke’s bond with the Devils—and his fragile relationship with Naomi. As Zeke’s hold on sobriety slips, he and Naomi must choose between settling for half a life apart, or embracing all they could be. Together.

The sun streaming in through the batwing doors was suddenly cut off. A blinding halo of light surrounded whoever it was, like an angel come down from heaven.

Naomi forgot her discomfort, her hunger, even her desperation as she stared at the figure walking in the saloon.

“Zeke, honey, I told you I’d meet you down at Elmer’s. You didn’t have to come all the way up here to escort me down.” Lucy sounded like a young woman flirting, and with the angel no less.

“Ain’t no bother, Lucy. It’s a beautiful day.” The figure moved into the saloon and Naomi blinked, trying to focus on who it was. “You hire another new girl?”

“Naomi.” Ignoring Lucy’s mispronunciation of her name, she stepped forward and focused on his face. “Naomi Tucker.”

They were the last words she’d probably be able to get out of her mouth for a while. The angel was beautiful with soft, wavy blond hair, chocolate brown eyes tipped with the thickest eyelashes she’d seen, wide shoulders, the hint of whiskers on his narrow cheeks and a mouth curved into a sardonic grin. The pistols hanging low on his hips were lethal looking.

“Where did you find her? She’s a mite skinny.” He spoke about Naomi as if she wasn’t standing five feet from him.

“Came in with the supply wagon. There ain’t much to her, but I’m willing to give her a chance. Besides, it’s not as if there’s a line of girls at my door begging for a job.” Lucy walked towards her office. “I’ve got to get my shawl. Be right back.” Her departure left Naomi alone with the stranger.

She clenched her teeth together to keep the angry retorts from escaping. The two of them had spoken about her like she was the runt of a sow’s litter at market and all the rest of the piglets had been purchased.

“And you are?” She finally found her voice and instead of shaking from nervousness, it shook with anger.

The man tipped back his hat and pierced her with a cool gaze. “Zeke Blackwood, Miss Tucker. It is Miss, isn’t it?”

“Yes, it is.” She struggled with the urge to show him how sharp her tongue could be, knowing Lucy was friends or perhaps more with him. It could cost her the first job she’d had in a month if she didn’t keep a leash on her temper. “How do you do?”

“I do right fine most days.” He stared a moment too long at Naomi, sending a shiver straight up her spine. The cold-eyed stare told her nothing about the man other than he liked to intimidate people, but she wasn’t dancing to that tune. “Where are you from, Miss Tucker?”

Naomi pasted a smile on her face. “All over.”

One blond eyebrow went up. “That’s an interesting answer.” He crossed his arms over his chest. “You on the run from the law?”

Naomi couldn’t help it, she laughed. “Not hardly. I never took the easy way out, Mr. Blackwood. I’ve worked to stay alive.”

Naomi swallowed hard. “I don’t know you well enough to use your Christian name.”

“Fair enough.” His gaze never strayed from hers and it seemed he was interrogating her. “You fixin’ to stay on permanently in Tanger?”

“I don’t see how that’s your business.” In actuality, Naomi had no idea where she’d live from one week to the next. Home was literally where she hung her proverbial hat.

“Well, you see I’m the sheriff.” He seemed to be uncomfortable with the title, strangely enough. “We’ve had lots of folks, ah, leave town, and Tanger needs new citizens.” Did the man ever blink?

“I didn’t realize you were the sheriff. How nice for Tanger.” Her temper was bound to land her in hot water sooner than later.

“No need to get snippy with me, Miss Tucker. I’m looking out for the welfare of the town.”

“I’m not being snippy. I’m just keeping my private life to myself.” A lie, of course, she was being a smart-mouthed brat.

He stepped towards her, and the loose-hipped swagger only accentuated his appeal, dammit. When he stood a mere foot from her he stopped. Up close, his brown eyes were more like whiskey in a crystal-cut glass, a myriad of colors changing at every angle.

“Are you trying to intimidate me?” she blurted, angry and embarrassed at her reaction to the man.

The corner of his mouth lifted ever so slightly. “Is it working?”