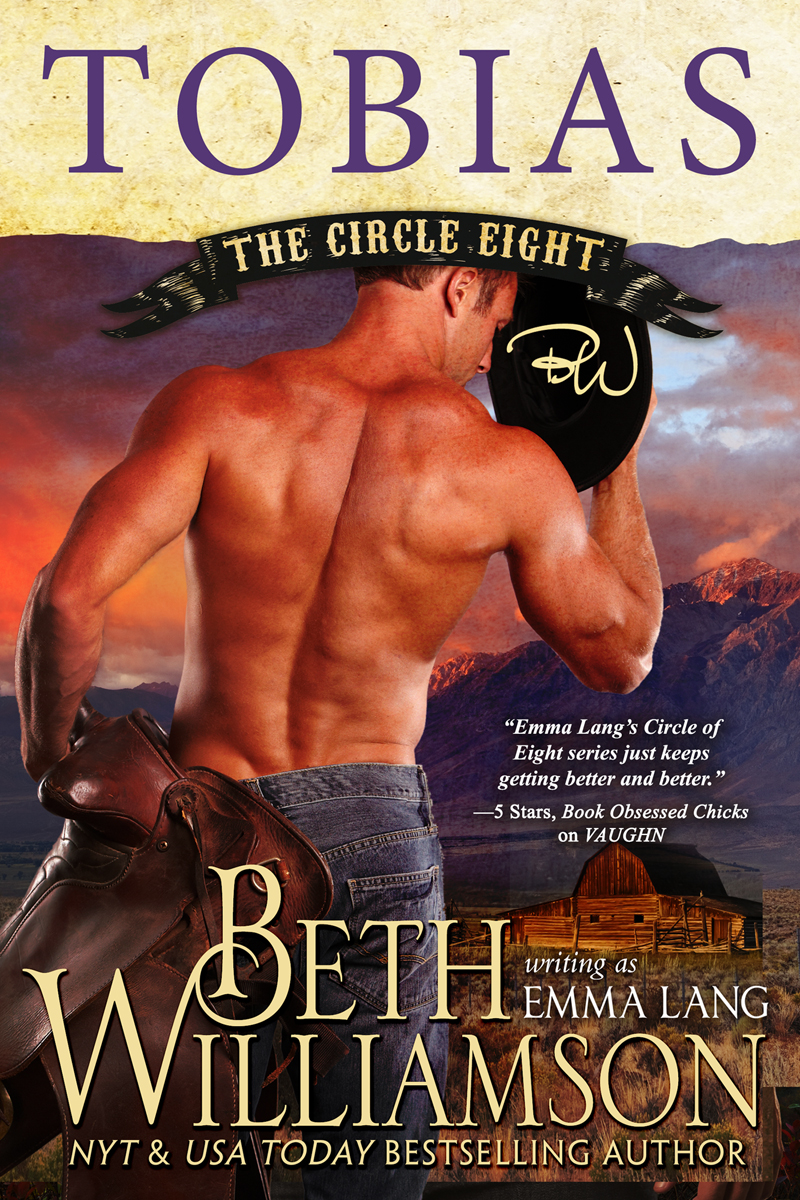 A broken man. A woman who needs a hero. A love that should never have been.

Rebecca Graham always knew she was to marry a hero and leave home in blissful happiness. She chose that man when she was seventeen. Unfortunately, her family hated him. In a fury over being swindled by someone else, Tobias burned down the Circle Eight, her family’s ranch. He spent four months rebuilding alongside her family in penance. When he accepts her help to nurse his grandfather, she has hopes he will become the hero she envisioned. She was wrong.

Tobias Gibson never expected happiness for himself. His brothers, adopted by their patriarch Pops, were all that matters. After Pops dies while under Rebecca Graham’s care, he cannot forgive her failure to save his grandfather. He ignores his attraction to Rebecca. There is too much bad blood between them.

Life never rolls forward as expected however. Five years after he’d last seen her, Rebecca Graham reenters his life. Together they face the storm that sweeps across their lives. They have to rely on each other and ignore the growing love setting their souls and hearts on fire.

Tobias was suddenly very alert. His gut tightened. “What happened?”

“Tree fell on him. Busted his leg up pretty bad, broken ribs maybe.”

Tobias digested that information. “What else?”

“He hit his head too. Hasn’t woken up since.” James folded his arms across his chest and looked off into the distance. “I don’t know what you can do for him but I know he’d have wanted me to tell you.”

“But I reckon you didn’t want me to tell me.” It wasn’t a question.

“No. You don’t care about nothin’ but getting drunk. But Will still thinks you’re good for something.” James shrugged. “Boss sent me for the Doc and we’re on our way back there now. I decided to come tell you and now I did.”

His brother turned to leave and Tobias stumbled after him. “Wait. Lemme clean up and come with you.”

James’s gaze narrowed. “I don’t think you can sit on a horse. Besides, I don’t want to smell you all the way there.”

Tobias deserved every word of it, and more. “C’mon, James. Gimme a chance. I can wash up and be ready in ten minutes.” He swallowed the lump of fear in his throat. Losing one of his brothers hadn’t occurred to him. He expected to die long before them, considering he was thirty and a pitiful fool. Will was a young man in his prime who didn’t deserve to die such a senseless death. “Please.”

James let out a sigh. “Ten minutes and we’re riding away. Since you can hardly find your way out of a whiskey bottle, I’m sure you couldn’t find the ranch we’re working at without me.”

It was achingly true. Tobias knew nothing of Donovan or what Will and James did for the rancher. There was no excuse for it.

Tobias ran for the cabin, although instead of actual running, it was more like a stumbling gait. He splashed tepid water from a pitcher on his face. The towel he dried off with couldn’t rightly be called clean but it was dry. He glanced around, embarrassed by the state of his house. If no one knew he lived there, they would think the cabin had been abandoned and vandalized. Pops would be ashamed of him.

Tobias shook his head, telling himself to stop thinking about a man dead more than five years. He threw a change of clothes, although dirty, into saddlebags and paused. His last bottle of whiskey sat on the table amidst the dirt and crumbs. His mouth watered.

He told himself not to take it, to leave it behind, but his hand picked up the bottle of its own volition and jammed it into the saddlebag. His hands shook when he walked back out of the cabin. His ramshackle hovel could stay as it was until he returned. No one would notice or care he was gone.

“Gotta get my horse—” Tobias stopped in mid-step and mid-sentence, his boot poised above the scrubby ground. James had already saddled the old gelding, but that wasn’t what stole his breath and made his heart stutter to a stop.

Rebecca Graham sat atop a horse beside his brother. Rebecca goddamn Graham.

As a seventeen-year-old young woman, she’d been pretty. Now, as a grown woman, she was stunning. Exquisite. Her thick, brown hair was swept off her head into a fancy twist on the back of her head. Her cheekbones were more prominent, accentuating those damn blue-green eyes.

She arrived at the lowest point in his life, when he was not only in a shitty barrel, he existed at the bottom of it. Tobias was a mess in so many ways. He wondered what he looked like to her, dirty, unshaven and in filthy clothes. Foolish man. He sucked in a much-needed breath and pushed the notion away. His appearance didn’t matter. She wasn’t for him and he wasn’t for her. That was obvious five years ago but it still didn’t stop his body from tightening in shock and arousal.

“What in the hell is going on?” His tone and words were sharp, but he wasn’t angry. He was surprised and scared that he couldn’t control his emotions. Five years of living in a dark hole of failure had turned him into a person he didn’t recognize. Less than a man.

“I told you I got the Doc to help Will. If you don’t want to come with us, then stay here, but we’re leaving.” James dropped the gelding’s reins and wheeled his horse around.

“Wait. I’m comin’.” Tobias scowled at Rebecca, whose expression remained calm. Damn her. She was the Doc? He didn’t understand what was happening and that notched up his discomfort more.

“Good afternoon, Tobias.” Her voice sliced through him, husky and rich. Where had the young, trembling girl gone? In her place was a confident, beautiful woman.

He tipped his head in greeting but didn’t trust himself to speak yet. With more confidence and sense than he possessed, he threw himself up on the horse. The gelding sidestepped at the abruptness of its master’s movement. Tobias gentled his actions and the horse shook his mane in displeasure. He patted the equine’s neck with apology.

“Let’s get a move on then.” Tobias didn’t recognize his own voice. Hell, he didn’t know who he was. How could he expect anyone else to?

James glanced in annoyance and then dug his heels into his horse’s flanks. Rebecca followed with Tobias at the rear. They rode single file across the craggy ground. Tobias wanted to ask a thousand questions about Will and Jeb, who was now James, and more urgently, about Rebecca.

Was she married? Did she have children? How was she a doctor? Women weren’t allowed to be doctors. Did she still live at the Circle Eight? So many unanswered and unspoken. For now he had to ride behind her and watch the round cheeks of her ass snuggle the saddle beneath her.

Dear Lord Jesus. It was going to be a very long ride.