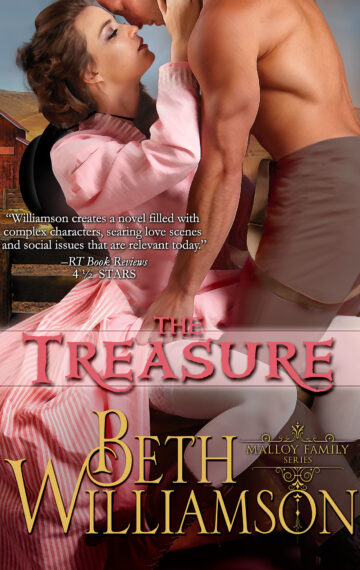 Ray Malloy is a single father who struggles to find the balance between raising his daughter and running a successful ranch. Unable to control his wild child daughter, he gives into his mother’s wish to hire a governess from New York to teach his daughter, Melody.

Lillian Wickham arrives in Wyoming to a cool reception and a bewildering boss. Destitute and desperate, she has little choice. She takes on the task of teaching a five-year-old girl manners and keep her attraction for Ray at bay. Neither of which is an easy task.

Danger sneaks into their lives and threatens the stubborn child they both love, they have to rely on each other, or let tragedy tear their world apart.

As Lily stepped from the train at the Cheshire station and set her valise down, she began to search the people on the platform for her new employer. She had bid goodbye to New York nearly a week ago, and here she was finally in Wyoming. It seemed like a dream, like it was happening to someone else. As she had crossed over the great country, she kept a journal of everything she saw. From rivers, to beautiful buildings, buffalo, wild horses and everything in between. It was all incredible and each amazing sight made her decision the best one she had ever made. Without it, she would never have seen all the treasures she’d been too busy to see when she was a child.

The first thing she noticed about Wyoming was it was really cold. Not the kind of cold on the streets of New York. But a biting, gnawing cold that chewed at her cheeks and left them numb. There was snow everywhere she looked. Even on the roof of the train depot. And icicles hung down, some of them at least a foot long. It was a winter wonderland. She pinched herself to stop gawking and started searching for Mr. Malloy again.

After the steam from the locomotive’s engines cleared, she saw a man standing alone in the middle of the platform.

Now that was a big man.

Squaring her shoulders, as well as her resolve, she picked up her valise and headed towards him.

“Mr. Malloy?” she asked when she was about ten feet away.

As she approached him, he took off his hat and regarded her with a bruising stare. He nodded at her question as his large hands tightened perceptibly on his hat. Setting her valise down, she straightened herself up to her full height of not quite five feet. His wavy hair was varying shades of brown and red, and his eyes were a deep emerald green. Yes, indeed, he was quite an imposing size. His bold gaze raked her up and down without a flicker of warmth. She shivered and wasn’t at all sure it was from the frigidly cold air.

“This isn’t going to work, Miss Wickham. I was expecting an older woman. Why, you’re no bigger than a minute, probably not even eighteen yet. Wyoming is no place for a woman like you. Go back to New York.” He turned, leaving her standing on the train platform.

Well, we’ll see about that.