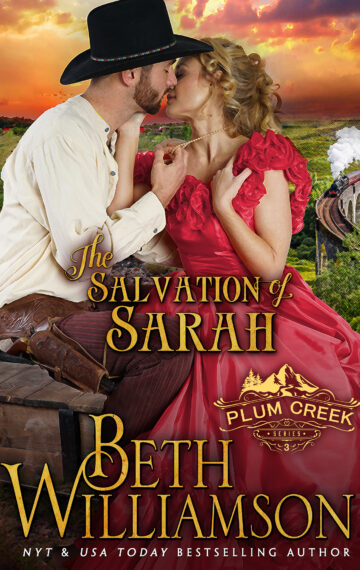 Betrayed by her own heart

Sarah Spalding has learned to forge her own way and never to trust anyone—least of all a Yankee. But when her companion abandons her while on a train to Colorado, Sarah begrudgingly accepts the help of Whitman Kendrick—a Yankee, yes, but one with the most bewitching green eyes. Allowing Whit to be her traveling escort is one thing, taking him as a lover is another—even though she’s tempted beyond reason.

Whit Kendrick isn’t quite sure what to make of the sharp-tongued, sassy woman sharing his train compartment. All he knows is that Sarah is refreshingly different from most women—and his urgent, primal attraction for her is unlike any he’s experienced. Breaking down Sarah’s wall of defense won’t be easy. But Whit is determined to prove to Sarah that they’re more alike than different—and loving each other is all they need.

The first stop on the two-thousand-mile train ride was only two hours from where they’d begun. Mr. Kendrick had fallen asleep, snoring almost louder than the damn train. She took great pleasure in watching him jerk awake when the train stopped. After all, he’d disturbed her.

He turned to look at her, and she was surprised to see he had the loveliest green eyes, nearly the shade of the rich grass that grew along the bank of the river behind the Spalding plantation house. Or that had grown there anyway. His chocolate brown hair was cut short in a nice cut that accentuated his strong jaw.

Dang, the man was attractive.

Whitman looked confused as he met her gaze. The moment seemed to stretch on as they stared at each other. Of course, the fool had to open his mouth and ruin her good mood.

Sarah almost reached for the cane to conk him when Mavis tutted.

“He’s obviously not quite awake.” Mavis nodded her steel-gray topped head. “Mr. Kendrick, this is Sarah, not Melissa.”

“I think he’s already aware of that, Mavis.” Sarah settled back into her corner and watched the play of emotions on the man’s face.

He had a shadow of whiskers already, and it wasn’t even noon. Obviously, he had to shave twice a day or risk giving whoever Melissa was the whisker burn of her life. Not that she cared who the woman was, but Jesus, he didn’t have to call her by that name. It annoyed her more than she wanted to admit.

“Melissa is my intended bride. I’m to meet her in Kansas City.” Whitman ran a hand down his face, the whiskers scraping against his skin. “I was dreaming about her.”

Sarah raised one brow. “I’ll bet you were.”

“Now, you just stop it,” Mavis murmured. “You hired me to come along on this trip, but I won’t put up with your shenanigans. You’re not an unruly girl anymore. You’re a spinster, and as such, have a duty to behave properly.” Mavis peered out the window as if she hadn’t just ripped into Sarah without mercy. “Oh look, another passenger is getting on the train.”

Sarah swallowed the anger, and the hurt, from the older woman’s comments. She found it disconcerting to have her shortcomings paraded in front of a stranger, a Yankee at that. The most exciting day of her life was turning into a miserable pile of pig shit in front of her eyes.

With a sigh, she glanced out the window at the town where they’d stopped. It was a small depot with an almost deserted platform. The only person standing there was an older man with a bowler hat and a crooked polka-dot bowtie.

The porter stepped down to the platform to help the old man as he walked ever-so-slowly to the train steps. With Sarah’s luck, the man would probably have a ticket for their compartment, too.

Whitman’s voice was right next to her ear, nearly a whisper. Sarah almost started, but years of teaching herself to be as still as death allowed her to control her reaction. She turned to find herself six inches from that green gaze and the longest eyelashes she’d ever seen on a man.

Whitman had a crook in his nose. No doubt, it had been broken. There was a scar bisecting his right eyebrow, and he’d nicked himself shaving, because there was a small cut on his chin. He was definitely all man and, damn, he smelled good.

Sarah pulled hard on the reins of her shocking arousal. No way in hell should she be sexually interested in Whitman Kendrick. For one thing, he was from the North. For another, he was getting married. She’d do best to keep her appetite for big men in check.

She frowned. “What’s all right?”

“Miss Ledbetter was pretty rude right there. I wouldn’t pay her any mind.”