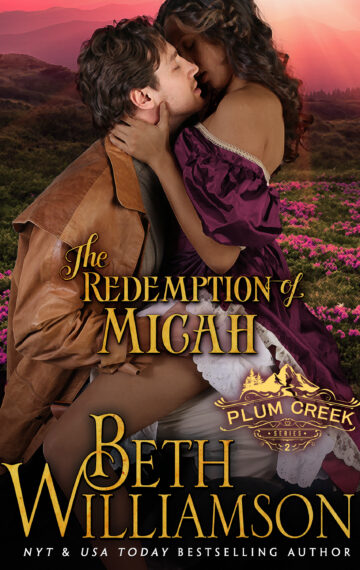 Once upon a time, they loved each other

Nothing about the room that Eppie awakens in feels like home—not the furnishings, the ill-fitting clothes, or the Colorado sunlight streaming in through the windows. And certainly not the stranger with long dark hair and silver eyes who claims to have been waiting for her for three long years.

Micah Spalding has spent each day hoping that Eppie would open her eyes and return to him. Yet the Eppie he loved was spirited and outspoken—utterly different to this reserved, aloof woman. Since her injury, Eppie has no memory of Micah or their daughter, or of a passion that was powerful enough to defy every convention. And though his scent and touch trigger something deep within her, Eppie can’t bring herself to believe in him.

Once, when war between his countrymen had almost broken him, Eppie brought Micah back to life. Now he must find a way to reach through the distance between them and remind her of everything they once shared, and prove that he has belief enough for both of them.

Two hours later, Micah sat in the parlor and listened to the sounds from the bathing room upstairs. Miracle was singing at the top of her lungs, while Candice hummed along. There was splashing, giggles, and fun afoot, yet he didn’t join them.

He ran his hands down his face and looked around at the opulent furniture left behind when Madeline moved to Denver. The room reminded him of his mother’s house and how they’d lived their lives in oblivious ignorance. Taking whatever they wanted without ever giving back.

Perhaps having Eppie, but losing her inch by inch, was his penance for such a frivolous childhood. Or perhaps it was punishment for his other multitudinous sins. No matter; this was his life, and he’d come to accept it, but he couldn’t enjoy it. Miracle was everything sweet and good in his life, and he treasured her beyond words. Just thinking about her soft hugs made his throat tighten.

God, he loved that little girl more than life.

With a sigh, he stood and headed toward the stairs. Each night, he sat with Miracle as she visited her Mama before bed. Her childish voice would detail every second of her day to an unresponsive Eppie. One day, perhaps, it would be more than a one-sided conversation.

Micah knew exactly how many breaths Eppie took each hour. He watched the rise and fall of her chest, waiting and hoping. The hell of it was, he wasn’t sure what he was hoping for. Micah wasn’t ready to let her go, but seeing her trapped between two worlds was killing him. He missed her, he loved her, and dammit all, he wanted to see her open her eyes again.

It had been a true-blue miracle the baby survived the trauma to its mother’s body, even more amazing was that the child was born healthy and perfect. When she’d been pregnant, watching Eppie had become a habit, because he could watch over his child. Their child. The baby made from a love that shouldn’t be but was. Miracle had been active, sometimes for hours at a time. During that six-month period, Micah never got tired of sitting by Eppie’s bedside and watching, placing his hand on her belly, telling them both he loved them.

Micah wanted so many things, but the two desires that burned down deep in his gut was the fact he wanted to convince Eppie to marry him, and he wanted to tell her he loved her. He’d been hesitant of revealing his feelings before, afraid of being rejected, of losing what he’d had.

Regret was something he knew well. Every day, he ate it for breakfast, lunch, and dinner. The bitter emotion brought him nothing but misery, and yet it was his constant companion. Orion used to keep him on the straight and narrow, but he’d passed away a few years earlier.

He entered Eppie’s bedroom and was immediately awash in her scent, that unique smell that always made his heart beat faster. A gas lamp burned on the side table, bathing her in a golden glow. Just being in the room with her made him feel better.

She still looked beautiful, even if she’d survived for nearly three years on broth, milk, and water. Micah knew every inch of her body from the adorably crooked little toe to the sweet spot behind her right ear. He ran his fingers down her cocoa-colored cheek, the skin as smooth as her daughter’s. “Hey there, Eppie.”

He sat in his usual chair and put her hand in his. Squeezing the limp fingers, he started talking of Daisy’s and Miracle’s antics. “That crazy dog actually came back and started digging again when I was fixing the damn hole she’d dug earlier. Miracle wasn’t happy about tying her up, but she did it anyway. She’s a good girl.”

Eppie’s voice, long since unheard, made the hairs on the back of his neck stand up. “Jesus Christ.” He jumped out of the chair, knocking it backwards a good three feet. Micah looked down into the eyes of the woman who held his heart. “Eppie?”

She blinked, glanced down at herself, then back at him. “Why am I lying in bed? Have I been ill?”

“Are you really talking to me, honey?” His heart slammed into his throat as it pounded so hard even his bones vibrated. “Eppie, oh my God, tell me I’m not dreaming.”

“I’m not sure who you are, or why you’re in the bedroom with me, but I’m fairly sure you shouldn’t be calling me ‘honey’.” Eppie cocked her head and narrowed her gaze. “Who are you?”