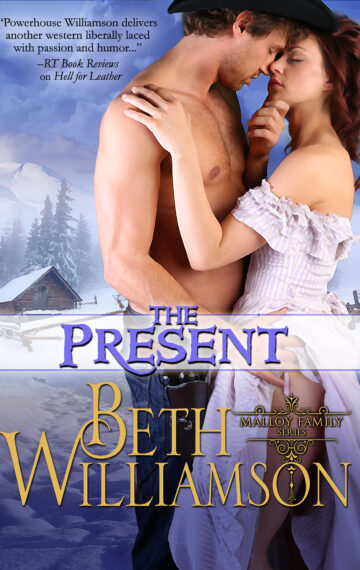 Ethan Malloy has distanced himself from the world after his wife’s death. Two years have passed in self-imposed loneliness. During a fateful snowstorm, he finds a stranger in his house when he returns. Ethan’s life will never be the same.

Fiona Carmichael didn’t intend to get lost in a snowstorm or end up spending the night in a house with a man she barely knew. He made her yearn for what she’d never found—a home, a man to love and be loved by.

Circumstances threw them together, but will they take the life fate offers them?

As the snowflakes blew in through the open door onto his face, a woman with carrot-red hair appeared above him. Her eyes were the blue of a deep winter sky and her nose was splattered with freckles. She had a wide mouth with plump lips, which were currently smiling at him.

“Well, heavenly saints, look at my present.” She reached behind him and closed the door. “You must be freezing.”

He wanted to ask her who the hell she was and why she was trespassing, but he still couldn’t catch his breath. Judging by her accent, she wasn’t a native of Wyoming. One of the Southern states was more like it. And her hair was so…red.

She knelt down beside him and frowned. “You own this place?”

Ethan managed a grunt and pointed a shaking finger at her.

“Fiona Carmichael.” She shook his hand with a surprising firmness. “I was on my way to the Petersen ranch. I’m the new housekeeper. The stupid horse decided to go off for a stroll in the storm. Old nag is probably safe at a livery by now.”

He vaguely remembered Rick Petersen mentioning hiring a housekeeper a month ago when he’d run into him in town. However, this woman wasn’t exactly what he expected. Most housekeepers were motherly types with overly large breasts and short, rotund shapes. Fiona Carmichael didn’t fit that description.

Her red hair practically glowed in the lantern light. Then there was the matter of her clothes. She was wearing britches and a shirt that was far too big for her, and her hair was in an unfashionable tangle, not unlike his sister Nicky’s locks. It was Fiona’s hands, however, that told him the real story. They were callused and much too strong for a simple housekeeper.

Her bright blue eyes narrowed as he continued to stare at her. “I reckon you can speak and not just stare, right?”

Ethan wondered if Fiona ever held on to a thought she didn’t put into words. She appeared to let everything roll off her tongue. He managed to suck in a much-needed breath and pushed himself up on his elbows.

She watched him, her head cocked to one side as if assessing him. “You’re one of those Malloys, aren’t you?”

It was his turn to frown. “I’m Ethan Malloy and this is my house. You, Fiona Carmichael, are trespassing.”

She raised one brow. “I thought about simply cowering on your front porch, but then I thought you might trip over my carcass.”

Fiona was for certain cursed, or blessed, with a sassy mouth and quick wit.

“How did you find my house anyway? It must’ve been nearly impossible to see.” His back ached right along with his head from the fall. Not to mention the fact his cheeks and ears burned from the warmth in the house.

“I don’t know, to be honest.” She started unbuttoning his coat and picking the crusted snow from the wool as she spoke. Ethan didn’t know what to make of her behavior. “I was chasing the blasted horse for a spell, then I saw a light burning and followed it. It turned out to be your house. I did knock, but no one answered. There was a fire burning, and well, I couldn’t resist saving my hide.”

Ethan sat up and stared at her. There had been no fire burning and no light when he’d left the house hours earlier. No one had been home except for this woman’s imagination. “I don’t mind that you took shelter in my house from the storm, but telling lies about how you got here isn’t helping either of us.”

She moved to his feet and tugged on his boot. Ethan allowed her to help him, although only God knew why. Undressing him was an intimate act, yet he let it happen with this stranger who had invaded his isolated sanctuary.

“I did no such thing, Mr. Malloy. You aren’t the grumpy one, are you? I heard he was married, but it appears there hasn’t been a woman in this house in quite a spell.” She got one boot off, then wiped her hands on the britches she wore.

Ethan snorted. She was referring to his brother Ray, obviously, and he hadn’t been as irritable since he’d gotten married to Lily. He even smiled now and then. “I’m not the grumpy one. You should be careful about judging people, you know.”

She stopped and glared. “You should take your own advice.”

His heart beat a steady tattoo in his chest as he realized it was the first time since Bonita’s death that he had experienced a flicker of interest in a female. This little carrot-topped woman had prompted him into feeling, albeit annoyance.

He held up his hands in surrender. “You’re right. I think we both got off on the wrong foot.”

She dropped his boots beneath the coat hooks. “Darn tootin’. Now, I’ve got some coffee on, and I hope you don’t mind, but I made some biscuits too.”

Ethan was astonished. She had made herself at home, hadn’t she? Fiona stood, then held out her hand to help him up. He was much larger than her, yet when he took her hand, he was on his feet in seconds.

“I told you. I’m Fiona Carmichael. That fall must’ve rattled your noggin something good. Why don’t you take a seat and I’ll get some vittles for you?” She walked into the kitchen, leaving him standing there like an idiot.

That’s when he recognized the britches and shirt she wore. They were his.

“Hey, those are my clothes!”

She looked back at him, hair swinging. “Yes, and thank you for letting me wear them. My wool suit was soaked through.”

Ethan glanced at the fireplace and noticed a green woolen ladies’ traveling suit, along with ruffly underthings, hanging on a rope strung on the mantle. Jesus, was she nude beneath his clothes?

Something aside from annoyance coursed through him. Holy hell.