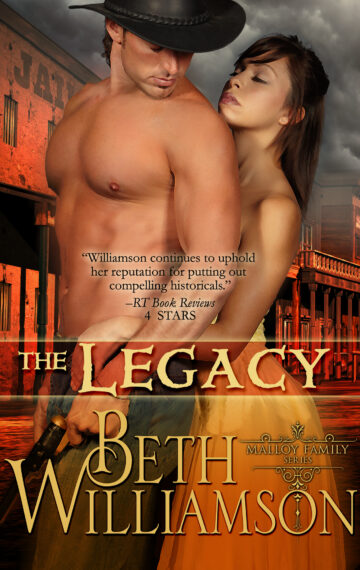 Adopted as a teenager, Noah Calhoun always struggled to find his place in the Malloy family. After a bull nearly kills his adopted father, Tyler, guilt-ridden Noah sets out on his own and find where he belongs. Schooled by Tyler in the art of capturing criminals, Noah lands a job as a sheriff in a small town.

Surviving without a home or parents since she was a child, Rosalyn Benedict was a strong, independent creature. She damn sure didn’t need the new sheriff poking his nose in her business or trying to fix her. He was handsome as sin but she couldn’t allow herself to rely on anyone, especially a man of the law.

Love doesn’t ask permission, however, it simply becomes what it will be. Noah has found the person he’s meant to be with and now he needs to convince her. Fate has other things in store for the unlikely pair, and they’ll need to set aside what they think they know and fight for what they can be.

Rosalyn Benedict knew good slops from bad ones. Elsa’s restaurant definitely had the good eats. It had been her favorite place for a long time. She had a feeling Elsa deliberately put real food in with the slops, but Rosalyn wasn’t going to complain. She ate enough each day to survive, and for that she was grateful. Since it was nearly time to eat, her stomach rumbled with hunger.

She waited in the shadows of the alley, content to listen to folks talking, the clink of forks on tin plates and the hooves of the horses on the street. Her cat, Whiskers, meowed at her feet as if to ask where the food was. Her warm fur swished against Rosalyn’s leg. With a smile, she scratched the calico behind the ears.

“Don’t worry, girl, we’ll be eating soon. Why don’t you go find yourself a juicy mouse?” Rosalyn felt the cat’s purr through her skin. “Go on now.”

Calling Whiskers “her” cat wasn’t entirely true. No one owned the cat; she sort of adopted Rosalyn ten years ago and they’d been sleeping companions ever since. With one final meow, the cat disappeared into the sunshine streaming in at the end of the alley.

The door opened and Rosalyn shrank behind the empty crates. Silent as the cat she counted as her only friend, she didn’t make a sound until the back door closed again. The scent of mashed potatoes and meatloaf tickled her nose.

She waited a full ten minutes, individually counting six hundred seconds before she moved. Even then, she advanced slowly on the bucket. No one else appeared and Rosalyn smiled at the feast. Meatloaf was her favorite.

After pulling her oft-washed handkerchief from her bag, she wiped her hands. As she peered into the bucket trying to decide on the choicest pieces of meat, a hand clamped down on her wrist.

Rosalyn looked up into the warmest pair of brown eyes she’d ever seen. They were attached to a man, a stranger with a strong grip, wavy brown hair and a gleaming silver star on his blue shirt.

“Let me go.” She yanked, but he didn’t move. In fact, he felt like an immovable rock.

Rosalyn frowned. “I don’t need help and I sure as hell don’t want any. Let me go.” She pulled again and he budged only half an inch.

“I’m the new sheriff, Noah Calhoun.” He looked down at the slops bucket with a look of pity. “You don’t need to eat scraps from other people. Please let me help you.”

“No.” She couldn’t be clearer than that. Was he touched in the head?

“Ma’am, I can’t go about my business knowing you’re eating slops and”—he glanced at her clothing—“from the look of you, living on the street.”

“Where I live is none of your business.”

“Well I ain’t one of them.” She tried to step on his foot, but he moved so quickly, even she was surprised. He had the grace of a big cat.

“I just want to help you.” His grip didn’t loosen, and no matter how much she yanked, she couldn’t get her arm free.

Rosalyn sighed. “I don’t want your help. Are you dense or something?”

The sheriff started to pull her toward the street. From there, she knew he’d take her to some woman who would force her to bathe, burn her clothes and say enough prayers to make her eyes cross.

Rosalyn opened her mouth and belted out a bloodcurdling scream. His eyes widened in shock and his grip loosened. That was all the opportunity she needed. She kicked him in the shin, got her arm free and ran down the alley toward the street, all too aware of the boots following hot on her heels.