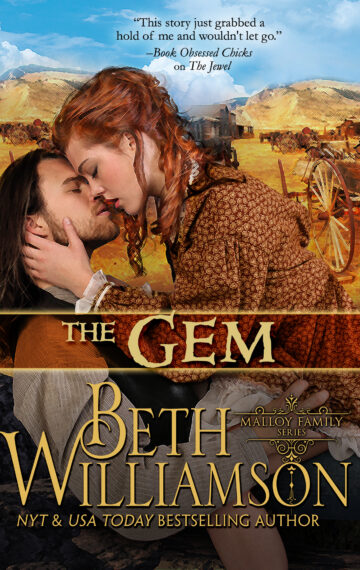 Charlie Chastain lives in Ft. Laramie, in the Wyoming territory. Her days are spent hunting for game, dressing the carcasses or stitching clothing from the hides. It’s not the life she thought she’d live when he left New York ten years earlier but she is content.

At the age of twenty-five, she doesn’t expect to marry but that’s all right with her. She doesn’t want to depend on anyone for anything.

Elijah Sylvester is her best friend, her confidante, the handyman at the fort who fixes things as well as she hunts. He’s spent his life fighting against those who considered him stupid or throwaway. He loves Charlie with every bit of his heart. If only she saw him as something more than a friend.

When Charlie embarks on a dangerous new adventure, Elijah rides along, determined to protect her. There are those who don’t approve of a woman doing the job of a man. Soon Charlie and Elijah become the hunted, fleeing for their lives. She doesn’t recognize how much Elijah means to her until it’s almost too late.

Love can save them, if she let’s herself believe.

Everything changed the moment she saw Elijah Sylvester naked.

Charlie should have knocked on the door again. She should have shouted to him before she entered his cabin. But she hadn’t. He was her best friend. They had spent time together every day for the last ten years. She couldn’t imagine what her life would be like without Eli at her side. As her friend, not as a man.

But now she’d ruined that friendship because of her impetuous actions—she walked in to find Eli naked, covered in soap. Although it was merely seconds, she lived a lifetime as she drank in the sight of the man she never knew beneath his ill-fitting clothes.

Soap bubbles clung to his body, accentuating golden muscles and sinew. Eli was tall and lean, but his form was built of elegant lines. How had he hid this from her for ten years? She’d never thought of him as a man, and now she would never think of anything else.

He ruined everything by revealing himself. Never mind that it was her fault or that he seemed as mortified as she was. He held a bucket over his head, presumably to rinse himself into the hip bath he stood in. His arms shook, as the water must’ve weighed a good bit.

He dumped the water over his head. The bucket clattered to the floor and he wiped the suds from his face. As he reached for the towel on the back of his chair, she moved closer to him, without thought. He jumped back and slipped on the wet floor, landing on his ass with a howl of pain, probably obtaining a few splinters in the process.

“Shit, Eli!” Charlie was right there beside him, inches away from his naked body.

Her heart stuttered and her thoughts scattered. She couldn’t look away.

“What are you doing here?” His voice was rough as sandpaper.

“I came to see if you wanted to go hunting tomorrow. I saw Big Buck.” She held out her hand. “And you’re naked.” She sounded like the village idiot. Her cheeks were hotter than a forge, burning up her face.

He scrambled backwards and got to his feet. She was painfully aware of how close she was to him. Close enough she could smell him, touch him—hell, she could kiss him.

Holy shit. What was wrong with her?

“I know I’m naked.” He snatched the towel off the chair, the end slapping her in the leg. She winced and made a face. She couldn’t decide to laugh or cry as he wrapped the towel around his torso. Unfortunately the thin fabric did not hide the body she’d seen in its full glory. “Why didn’t you wait until I invited you in?”

She shook her head. “I didn’t know you’d be naked.”

“Oh, for God’s sake, Charlie, would you forget about me being naked?” He tightened the towel with a jerk.

“I can’t.” She stepped closer, her curiosity overcoming the ridiculous reaction she couldn’t control. “You’re not what I expected.”

“You need to leave.” He pointed at the door.

She reached up and ran her hand down his shoulder to his arm. “I didn’t know you had these under your shirt.” Her fingers traced the curve of a muscle. “Hell, I saw Mason without his clothes, but he didn’t have these. You hide yourself from people. It’s no wonder. The women would chase you if they knew what was under your clothes.” She touched the other shoulder and his small nipples pebbled to a point. Men’s nipples did that too?

“Jesus, Charlie. What are you doing? What are you saying?” He stepped back to put at least a foot between them. Her hand traveled with him, the heat from his skin almost burning her.

Her gaze snapped to his and her hand finally dropped to her side. “I don’t know.”

The moment stretched between them, the air crackling. Charlie managed to suck in a breath, but her chest was heavy. It was like breathing underwater.