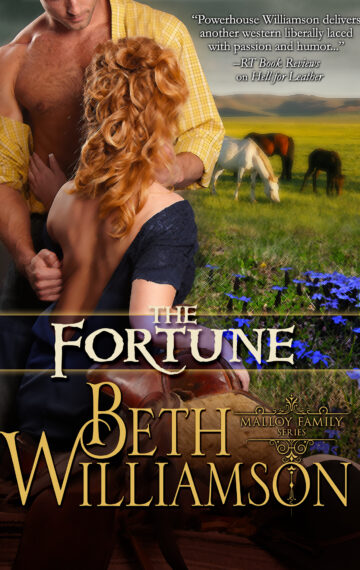 When Francesca Chastain sets off on the six month journey from New York to Oregon with her family, she is running from the darkness of her past. The land of milk and honey offers a fresh start. The wagon master’s assistant, John Malloy, ruins her dress and sets her off balance with his smile, his flirting and his handsome visage. She doesn’t want to find herself in need of him, or worse, falling in love with him.

John Malloy has worked wagon trains for three years, saving every cent to start his horse ranch in the Wyoming Territory. This is his last trip and the feisty Frankie Chastain turns it into the most confusing, frustrating time of his life. Then she disappears.

Frankie’s past shadows her travels and threatens her future. Trapped in the wild, she has to rely on John to get back to her family. Neither one expects the intensity of their attraction or the fight for their lives.

Frankie Chastain landed in the cold mud with a bone-jarring thump. To add insult to injury, a large body slammed into her, knocking the breath from her body. It was most assuredly a man. A man pushed her into the mud!

“Hell’s bells. Lord save me from citified women.” His deep voice vibrated through her.

“I. Cannot. Breathe.” She attempted unsuccessfully to move him.

He rolled off and landed on his back, and a splatter of mud hit the side of her face. After sucking in a much-needed breath, she turned to look at him. He was dressed in dark colors, with a brown hat and whiskered cheeks. She was startled to find his eyes were the same color of the sky, a bright blue in the darkness of his visage. Splats of the brown slime decorated his cheeks. He was handsome, no doubt about that, but he was also scowling and angry. Well, so was she.

“You pushed me into the mud, monsieur.”

He rolled away from her and got to his knees. Mud coated the entire back of him and his hat. “A little mud was better than being run over by a wagon, lady.” He peered his hand, cursing under his breath. “Did you shoot me?”

“Shoot you?” She glanced at her hand and was surprised to find le petit protector had fired during the incident. The tiny pistol sat on her finger for protection, but she’d never fired it. Her skin was reddened and covered with specks of black powder. “Not intentionally, monsieur. It was an accident.”

She attempted to climb out of the mud without help but failed. Each time she tried to find purchase, she sank lower into the mire. Her dress, one of two she owned, would be ruined. The mud wasn’t just dirt—after all, there were a great deal of horses in Independence.

“An accident, hm?” He shook his head and frowned hard enough to make his brows nearly touch. “I can’t believe you shot me after I saved your life. Didn’t you see that wagon coming and hear the driver yelling at you? You were about to be flattened by that rig and you shot me for helping you.” His gaze narrowed. “Where did you hide the gun?”

She held up her hand, showing him the tiny ring gun, now caked with mud. She always wore it, more for her piece of mind than its deadly force, when walking around Independence. It had been a gift from her mother. Le petit protector was so tiny, the bullets were barely larger than a seed. It was meant to merely frighten an assailant, not cause bodily injury.

“Is that a tiny pistol on your finger? I ain’t never seen the like.” He glanced at his own hand. “Dammit, I’m bleeding. I don’t have money to go to the doctor.”

He got to his feet, without offering to help her. The stranger cursed quite vividly as he proceeded to walk in circles, shooting a glare at her every two seconds. Some of the curses she’d never heard before.

The gunshot had burned her skin, which stank and stung. She needed to get back to the wagon and have Maman prepare a poultice for the burns. No doubt her mother would also provide medical assistance to her reluctant rescuer. Frankie held up her arms. “If you will assist me, my mother can doctor us both.”

He frowned. “Your mother is a doctor?”

“She is a nurse. Now help me up, please. The mud is hanging onto me like a steel trap.” With her arms beginning to burn from their elevated position, she frowned at the whiskered, angry man.

“Fine, but I ain’t paying for it. You shot me.” He took hold of her wrists and in seconds she was airborne, landing on her feet abruptly. She craned her neck to look up at him. Frankie barely topped five feet and he was at least a foot taller, with shoulders as wide as a doorframe and arms that could probably snap her in two.

Frankie was more than surprised to find a stirring low in her belly. She didn’t think any man would attract her, not after what she’d been through, yet the fluttering in her stomach proved her wrong.