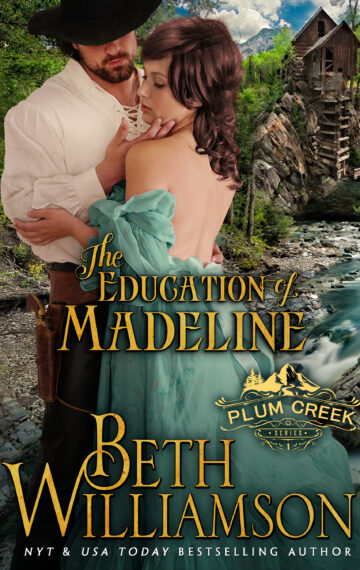 The Right Man Comes Along

Madeline Brewster practically owns Plum City, Colorado. But at thirty-two, she knows she has missed any chance for happiness. Until she finds a tall, strong, handsome Irishman on the wrong end of the hangman’s noose. Suddenly this unconventional woman comes up with an outrageous idea…

Teague O’Neal has rugged cheekbones, tousled black curls, and eyes as blue as the sky, even if he is caked in Colorado mud. The men insist they caught him horse-thieving, and there’s something desperate about him that says he’d do anything for a buck.

Maybe it was pure chance, or maybe it was something more that brought Madeline and Teague together. But one thing’s clear, between a woman who has just about everything she could ever want, and a man who’s lost that and more, they might find something in between worth living for.

Madeline squared her shoulders with an outward calm while her heart thumped like a racehorse. “What is all this about a hanging?” She could almost see him rubbing his hands together with glee to impart the juicy gossip to her.

“Well, I heard that the sheriff caught this Irishman red-handed with Old Clem’s horse. They knew it was his ’cause of the blaze on his nose. Judge Martin ordered the hanging.”

She tapped her fingers on the large oak desk. “I see. And when is this event taking place?”

“And the Irishman? Does anyone know him?” Madeline kept her expression blank lest he see her interest.

Mr. Cleeson shook his head. “Came into town a few weeks ago. Was working out at the Double R as a wrangler.”

So, a drifter and a potential horse thief. “And his age?” She didn’t care how old he was, provided he was a grown man.

Mr. Cleeson just looked at her with a blank stare.

Her lips pressed together. “How old is he?”

She drew a deep breath. He sounded perfect. Now, all she had to do was get to the old maple at the edge of town before they hung him.

Madeline snatched up her reticule and stood, startling Mr. Cleeson who jumped a foot in the air. “I’m leaving early today. I will be back for my usual afternoon hours tomorrow. Be sure to follow proper procedures all around.”

Mr. Cleeson nodded and scurried back to his chair. He seemed eager to impart her odd questioning to his coworkers, because as soon as he sat down, he leaned over to Mr. Bryson and started whispering madly.

Madeline pinned on her hat, tugged on her gloves, and swept out of the bank with her head high and her heart pounding. She was about to go meet the man who might change her life. She walked down the wood-planked boardwalk with her back straight as an arrow. Most people nodded a greeting, but no one spoke. They rarely did.

Her heeled boots clacked along without slowing. Even so, the walk to the edge of town took more than ten minutes. By the time she got to the tree, a group of twenty men had gathered. In the midst of them, perched upon an old draught horse, was the biggest, filthiest man she had ever seen.

He looked to have black hair, although the dirt and twigs caking it made it hard to tell for certain. His clothing was matted and wrinkled. The original color was impossible to discern beneath the caked-on dirt. His legs hung down past the horse’s belly. Everything about him was big, from his hands to his feet, and everything in between.

The incompetent sheriff and the drunken judge had put the man on a horse too small for their purpose.

Wrapped around his neck was a thick noose of the sturdiest hemp. He had at least a week’s worth of whiskers on his face. His bright eyes glanced through the crowd, searching. When his glance landed on her, the only woman present, he cocked his head to the side and lazily ran his gaze up and down her body.

A flush stole over her cheeks at his perusal. Never, not once, had any man looked at her as a woman. And what does she do when one finally does? Blush like a schoolgirl!

Madeline had been right to come. With a long bath, a razor, and several bars of soap, he would be perfect. “Excuse me, gentlemen,” she said, raising her voice.

A hush fell over the crowd as the entire group, which had been pointedly ignoring her, turned to look.

She clasped her hands at her waist, while assuming her frostiest expression. “I would like to know what the charges are against this man.”

Judge Earl Martin walked over to her with his silly bowler hat perched atop his shining head. His suspenders looked to be holding up nothing but the thumbs he’d hooked beneath them, since his pants were tight against his round belly. He stopped three feet away — his usual habit since she was at least six inches taller.

He regarded her with his bleary brown eyes over his mottled red nose and mutton-chop sideburns. “Now, Miss Brewster, you know this ain’t no place for a lady.”

Someone in the crowd snickered.

“A hanging is man’s business,” he said with a superior nod. “Why don’t you go on back to the bank and take care of things there? Your pa wouldn’t have wanted you to witness this.”

Madeline raised one eyebrow and looked down her nose at the judge. “My father has been dead two years, Earl. And unless you find a much bigger horse, there is no way you can hang that man.”

Mumbles and curses emanated from the crowd.

His bushy eyebrows lowered. “We were just working on that problem, Miss Brewster. But like I said, this ain’t no place for a lady.”

His harsher tone didn’t sway her from her purpose. “What are the charges?”

The judge took off his hat and ran his hand down his face, a sheen of perspiration evident on his bald pate. “You ain’t going back to the bank, are you?”

“Not without the information I have asked for.”

The sheriff held the reins of the horse. Jackson Bailey was a pompous braggart who couldn’t find his ass with both hands. They had been in school together until she reached the age of twelve and had to stay home with a private tutor.

Jackson had always been a bit of a bully, and the silver badge pinned to his shirt gave him all the authority he needed to exercise that bad habit.

She grudgingly admitted he was a good-looking man, well built, with dark blond hair and blue eyes. Unfortunately, he was as dumb as he was handsome. She turned her head toward him. “Sheriff Bailey?”

“He stole Old Clem’s horse, Madeline. We’ve got an eyewitness.”

“Is this the horse?” she asked, eyeing the creature in question.

“Yup, this is Bud. Been Old Clem’s horse for years and years.”

“Arnie Jones saw him leading it into town, pretty as you please.” He looked up at the Irishman, a smug smile curving his mouth. “Danged fool didn’t even try to hide his thievery.”

Madeline tapped her toe beneath her skirt where it couldn’t be seen. “Did you ask him how he came to be in possession of the horse?”

The group was silent for a moment.

“Of course, we did. He said he bought it at the hostelry over in Coopersville.” Jackson snorted a laugh. “As if we would believe that.”

Madeline controlled herself, just barely, from rolling her eyes. “And have you spoken to Old Clem?” she said, fighting to keep her tone even.

“No, he’s not at his house. Pete says he went to visit his daughter in Denver for a month.”

The situation was worse than she thought. They were all a bunch of incompetent fools. She drew a deep breath. “Sheriff Bailey, you cannot hang this man.”