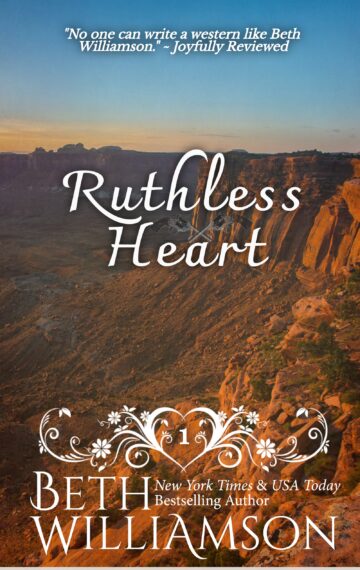 He led her astray, and she never wanted to go back.

Sheltered all her life, Eliza Hunter never imagined herself alone in the vast Utah plains, much less trailing a mysterious, rugged man hired to hunt down her beautiful younger sister. Unable to reveal the truth about her pursuit of him, Eliza plays student to the teacher, transforming herself in the process. And she when she finds herself sharing the warmth of Grady’s campfire, wrapped in his arms, hypnotized by his power, soon she is a naive spinster no more…

Grady Wolfe is more than a loner, he’s a man forever on the run, an assassin with a dark past and an even darker future. With a body and soul finely honed from living off the land, Grady knows he should leave the irresistible woman alone, but she stirs something in him he hasn’t felt before. Now he’s lost in the woods for the first time in his life—with a dangerous job to do. And no one—not even the distracting Eliza—is going to stop him.

Grady’s head throbbed in tune with his jaw, his eye and his knuckles. Jesus, that sheriff had fists like oak and he was faster than hell, considering he blindsided Grady. Someone else was in the alley too, likely that big son of a bitch behind the bar. He wanted to ride back into town and teach them a thing or two about ambushing someone.

He should be sitting in a jail cell instead of riding away with two dozen cuts and bruises on his face. Eliza surprised him, a feat she seemed to enjoy doing every hour or so. When she pulled out the bible and started quoting scripture, he had to clench his jaw shut to keep his mouth from falling open.

She had looked like one of those bible beating preachers in a tent he’d seen on occasion in his travels. All full of passion and God, reminding him that the schoolmarm was so much more than the little brown wren.

“We should stop so I can provide medical assistance to your wounds.”

Oh, yeah, there was the book head again. “You mean put some bandages on me?”

“Perhaps stitches as well. Don’t worry, I have had experience with medical procedures before. We don’t have, I mean, we didn’t have a physician in town when I was a child so there was always a woman trained in medicine and healing.”

Interesting bit of information about her, one he wouldn’t have guessed judging by what she carried in her traveling bags.

“You have medical supplies?”

“We do now. I had that horrible shopkeeper put some in with your purchases.” She looked down at her hands, fiddling with the reins clutched in her slender fingers. “I apologize for spending so much on me. I never intended on it and honestly I’m mortified by the amount.”

Grady knew the dress cost around eight dollars, so he couldn’t imagine what she would have spent so much money on, but he was damn curious now. Did she buy some kind of undergarments for her “services”? He’d handed over thirty dollars to the bastard Abe and now he was mentally tallying what he’d put on the counter to buy. Somewhere in there, Eliza had spent another ten or twelve dollars.

Question was, what did she buy?

“There is a clearing with access to a stream. It’s an ideal spot for us to stop.” She pointed ahead, but when Grady turned to look, the world began to spin a bit.

He leaned forward and closed his eyes. As he wrapped his arms around the horse’s neck, he hoped Eliza would be able to move his two hundred pound carcass when he passed out again. Damn sheriff likely cracked Grady’s skull. Now he really had a reason to go back and kill him.

His stomach roiled as the world refused to stop spinning. He wanted to warn Eliza that they really needed to stop but all that came out was a grunt. However, he underestimated Eliza yet again.

“Hold on, Grady. We’re almost there.”

Was that worry he heard? Wouldn’t that be a neat trick. Someone actually worried about him. Although in the saloon she’d certainly put on quite a show when she had seen him beaten and bloody. Her voice sounded closer, then when her hand touched his back, he realized she’d ridden up next to him.

It he wasn’t about to lose what was left of his stomach, he might think she cared about him. He snorted at the thought, then started to slide sideways and he grasped the horse’s mane, but it wasn’t enough. Then Eliza took hold of his belt and held on firmly.

She anchored him on the saddle and apparently took the reins from him. How the hell she could manage all that when she was short, soft and round, he would never know. Obviously the woman had a spine of steel and muscles to match.

The horses stopped and Grady focused on breathing and not vomiting.

“I’m going to let go of you for just a moment or two while I ah, dismount.”

He knew just how graceful she was getting on and off and horse. Hopefully he wouldn’t hit the ground before she did. Before he even knew she’d let go of him, she was by his side taking off his hat. Her cool hand touched his forehead.

“I believe you have a concussion, Grady. It’s caused by a blow to the head and I’m afraid it’s quite painful, although you probably already know that.” She talked faster with each word and Grady knew then that aside from her fancy talk, Eliza did feel fear. This time it was for him, a unique and disconcerting thing.

“I’ve laid out your bedroll on the grass near the stream. I’m going to help you down off the horse and if we’re lucky, I can get you over to the bedroll successfully.” She cupped his cheek. “I apologize in advance if my clumsy efforts result in more injuries.”

“Let’s just get on with it,” he managed to get out.

She took hold of his belt again and wrapped his left arm around her shoulders. He slid off the saddle and the world began to gray around the edges. Eliza held him up like a tiny shadow pushing his chest. He knew he was likely crushing her, but he was barely conscious.

“That’s it, now it’s only a few feet. We can do it.” Her breath came in pants as he felt himself moving across the ground, although his feet barely moved.

Before he realized she was dexterous enough to throw anything down, the bedroll was below them and slowly he got closer to it. She was holding his weight and sinking down until he was close enough to gently roll off onto the blanket. When he hit the scratchy wool, he saw her sweaty face with worry clearly written all over it.

He would have sworn he saw a tear snake down her cheek, but it would mean someone was crying for him. Impossible really.