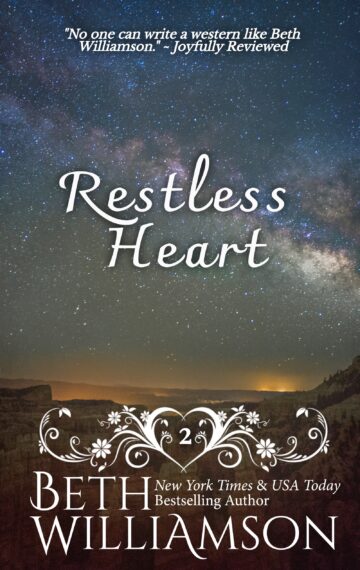 Angeline Hunter ran from a horrific marriage, to start her life again in a small town in Wyoming, away from the Mormon life she had escaped in Utah. She didn’t want to fall in love, or even fall in like, with a man like Samuel Carver. He was too nice, too normal, and far out of the reach for a woman who lived each day in a lie.

Sam Carver had hair the color of midnight and eyes darker than pitch—the eyes of a man who’d seen too much. But he couldn’t get enough of the mysterious, ethereal beauty who had turned up in his little Wyoming town, working at the Blue Plate, keeping to herself.

He knew Angeline Hunter was running scared, pursued by a fanatic who threatened her life. But no matter what it took, Sam would convince his angel to put her trust in him, to put the painful past behind her and learn just how pleasurable the present could be.

Sam walked out of the general store with a box of penny nails. He needed to finish the table he was making for his father before another job came his way. Fortunately his father was taking an afternoon nap so he could make a quick trip to the store.

He was turning toward home when a flash of blue caught his eye. His mouth dropped open when he realized it was Sheriff Booth sprinting down the sidewalk with Angeline. Sam knew immediately something was wrong and she could be in danger. Her loco husband might have sent another hired gun after her.

Sam dropped the nails and ran. He kept her in his sights, the shiny gold of her hair sparkled in the sunlight each time she went between buildings. They had a good head start so they arrived at the restaurant before he did.

When the sheriff pulled his gun and walked in with Angeline at his back, Sam ran harder, his heart lodged somewhere near his throat.

Sam arrived a minute later his breathing as labored as his heart rate. The sheriff was walking toward the door.

The older man glanced up at Sam and tucked his gun back in its holster. “Darned if I know. Miss Angeline said someone was going to hurt her so I came over here and turns out she knows the fella.”

“She knows the fella?” Sam repeated it as if it were a foreign language. “What do you mean?”

“Said something to him about he wasn’t supposed to be here and scolded him a bit for scaring her.” The sheriff shrugged. “She said she was okay and now I’m leaving.”

Sam was completely confused. He rounded the corner into the restaurant to find Angeline staring at a stranger, and instead of being afraid, she looked sad.

“Jonathan, I told you to leave. You can’t stay here.”

Sam took stock of the stranger. He was young, likely no more than twenty with short dark hair, at least three days worth of whiskers, unkempt but serviceable clothes. It was his eyes, however, that drew Sam’s attention. The man looked completely, hopelessly in love with Angeline. Sam’s stomach clenched.

“I can’t just leave, Angeline. Everything I expected, wished and hoped for just got taken away from me. I’m lost without you, without our future.” The man, obviously named Jonathan, was pleading with her.

“You’ve got to find your own path. I can’t tell you where to go or what to do, but I know you can’t stay here.” Angeline sounded firm and unshakable. Sam almost didn’t recognize the sweet, soft-spoken woman.

He wanted to clap for her.

He wanted to drop to his knees and ask her to marry him again, to mark his territory so this stranger left her alone.

Sam stepped into the room and the stranger noticed him. The man’s lips curled back into a sneer. He pointed at Sam.

“I see your Indian is still here, sniffing around your skirts.”

Sam couldn’t have been more surprised if the man had slapped him. How the hell did he even know who Sam was or that he and Angeline were linked?

She snapped her gaze to his and her expression changed to guilt. Sam’s heart dropped to somewhere near his feet. What hadn’t she told him? He thought they’d been completely honest with each other about everything, including the man she ran from. This was obviously not him because the kid was barely shaving.

“Angeline, what’s going on?” Sam was disappointed to hear his voice was husky, full of the dark emotions swirling around inside him.

“I, uh, ran into an old friend.” She sounded shaky and nervous. “I asked him to keep quiet about seeing me and he left Forestville.” She turned back to him and narrowed her gaze. “He was supposed to leave and not come back.”

The younger man had the balls to kneel in front of her like a penitent in front of a preacher. “Angeline, darling, I love you. I have since you were five years old. I can’t just leave.”

Obviously there were things Angeline had not shared with Sam, not the least of which she already had a beau who was obsessed with her. Not that he blamed the man, Sam was a little obsessed himself, but the fact remained she had hidden that tidbit of information. As well as the one where this Jonathan had been here in town to see her a few days earlier.

Sam’s temper began bubbling up from the slow simmer it had been at. “You heard her, now get out.”

“I’m not talking to you Indian.” The stranger looked up at Angeline, pleading with her with his entire body. “Please, please, tell me you still love me.”

She looked at Sam and he could see the pleading was wearing at her. That was all it took for Sam’s temper to completely boil over. He grabbed hold of the kid by the collar and dragged him out of the restaurant. Fury drove him to ignore the other man’s protests and feeble attempts to stop him.

Sam made it outside and pulled Jonathan out into the street. The dirt wasn’t mud but it was wet enough to leave dark smears on the man’s already dirty clothes. He let the kid loose and stepped back, fists up. His anger at Angeline mixed with his love for her, coming together to make him into a man ready to defend his future.

The kid glared at him and rose to his feet. He wasn’t small by any means, at least as tall as Sam. Not overly muscular but he was solid for sure. It was apparent, however, that Jonathan had never been in a fight before in his life.

“You ready to fight me for her, kid?”