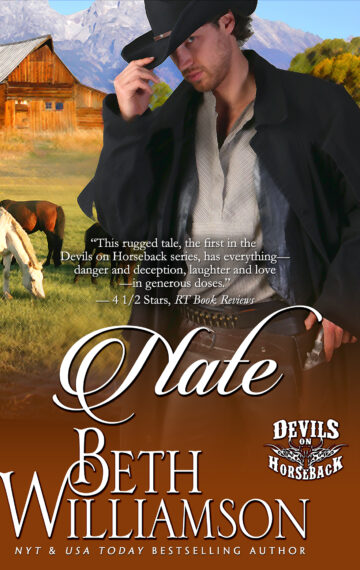 Nate Marchand grew up as the only son of the town drunk. His mother died when he was five, due to his father’s carelessness. Nate found that order in the chaos was the only thing that kept him sane. As soon as the call came to take up arms against the Union aggression, Nate left behind his sodden childhood and joined the band of friends known as the Devils on Horseback.

Intelligence and attention to detail garnered him promotions until he reached lieutenant, third in the chain of command under Captain Gideon Blackwood.

When the Devils headed west and started their own business, Nate became the unofficial keeper of information. Their first job was to get rid of squatters Samuel O’Shea ranch outside Dallas. Nate depended on information, unfortunately, their information wasn’t complete.

He didn’t expect to find Elisa Taggart and her ailing father, trying desperately to regain the land O’Shea had stolen while her father was away during the water.

He didn’t expect to fall in love with the outspoken, hot tempered beauty, nor that his orderly world would crumble.

Desperate to regain his footing, Nate tries to ignore his heart and his conscience in favor of his mind and his wallet.

He finally tells the Devils the truth of what he learned, and together, they take on O’Shea to save the Taggarts, and expose a deadly conspiracy to grab land at whatever the cost.

Elisa Taggert stood in the corner of the store with her fists clenched. She told herself to relax and take a breath, but it was hard. So hard. What she really wanted to do was follow Samuel O’Shea out that door and put a bullet in him. Or two.

He dared pretend he hardly knew her, or that he hadn’t stolen her father’s land right out from under him. O’Shea treated her like a goddamn stranger!

The bell tinkled over the door and a man walked in. Elisa judged him to be in his mid-twenties, with dark hair settled under a dark brown hat. Gray trousers marked him as an ex-Confederate soldier, although his jacket was of good quality. Elisa noted the bulge of a gun on his left hip. Wide shoulders filled out the jacket nicely. His fingers were long and twitched as if he needed to be moving constantly.

His gaze swung to hers and she could see the hunter within him. The moment his dark eyes touched hers, she felt a jolt go through her from top to bottom. Her heart started pounding and her palms grew moist. Actually, to her shame, they weren’t the only moist part of her body.

Sweet Mary, he was beautiful. A sharp chin with an outline of whiskers framing the deep cleft in the middle. A long, aristocratic nose sat between the darkest, deepest eyes she’d ever seen. Eyes that knew pain, misery and perhaps joy. Elisa’s entire world shifted slightly under her booted feet and she knew an eternal moment of uncertainty.

He blinked and the spell between them snapped. She stepped further into the shadows of the corner and he paused before walking to the counter to talk to Marvin. Elisa pressed her hand to her chest to push on her racing heart. What the hell was wrong with her? A handsome stranger glanced at her and she turned into a blithering, foolish woman?

“Good afternoon, sir. Nate Marchand at your service. I was wondering if you wouldn’t mind posting this advertisement in your store.”

His voice was like hot honey on a biscuit, warm and smooth. A shiver licked up her spine at the southern drawl and the gentlemanly tone. Most definitely a southerner, likely from Alabama or Georgia. There were plenty of them in Texas—like ragweed, they just kept popping up.

“Advertisement for what?” Marvin asked. He was one of those people she wasn’t sure was for her or against her. She’d known Marvin nearly all her life, but he refused to take a side in the battle for her father’s land. That landed him square in her suspicious group of folks.

Elisa walked toward the shelf of canned peaches to peek through at the two men. The stranger stood at least a head taller than Marvin, who was a short, balding man with barely enough shoulder to shrug. His watery eyes hid behind thick spectacles. Then he did the one thing that really irked her—he licked his finger to wipe down his eyebrows, which seemed to have a life of their own, wiry little buggers.

“D.H. Enterprises. We’re new to town and we’d like to advertise our services.”

Oh, God, that voice. It was wreaking havoc on Elisa’s equilibrium. Every time he spoke, another bolt of awareness ripped through her. It was disconcerting and downright annoying. She didn’t know this stranger from a hole in the ground. Why should he affect her so strongly?

“What kind of services?”

A minute sigh drifted from the stranger’s mouth and she sensed his frustration at repeating the same information. Likely in every town he and his “Enterprises” had passed through.

“Anything that needs to be done. My colleagues and I are available immediately.”

“Well, I dunno, stranger,” Marvin hedged. “Sounds a mite bit shady to me.”

“Mr. O’Shea told me to tell you it was all right to post it.”

The stranger’s words rippled around her and anger replaced her fascination with him.

“What business do you have with Mr. O’Shea?” she snapped as she stepped out into full view.

Marvin’s eyebrows went clear to his hairline and he skittered backwards like a bug.

The stranger turned toward her and his dark gaze swept her up and down. Noted the trousers, the old, faded calico shirt, the dirty neckerchief and scuffed chaps. Not to mention the battered hat that sat on her head with a big hole through the center of it. Her damned body betrayed her by warming to the touch of his gaze. She tried to clench her muscles and will away the feelings, but it was no use. She was aroused, dammit to hell.