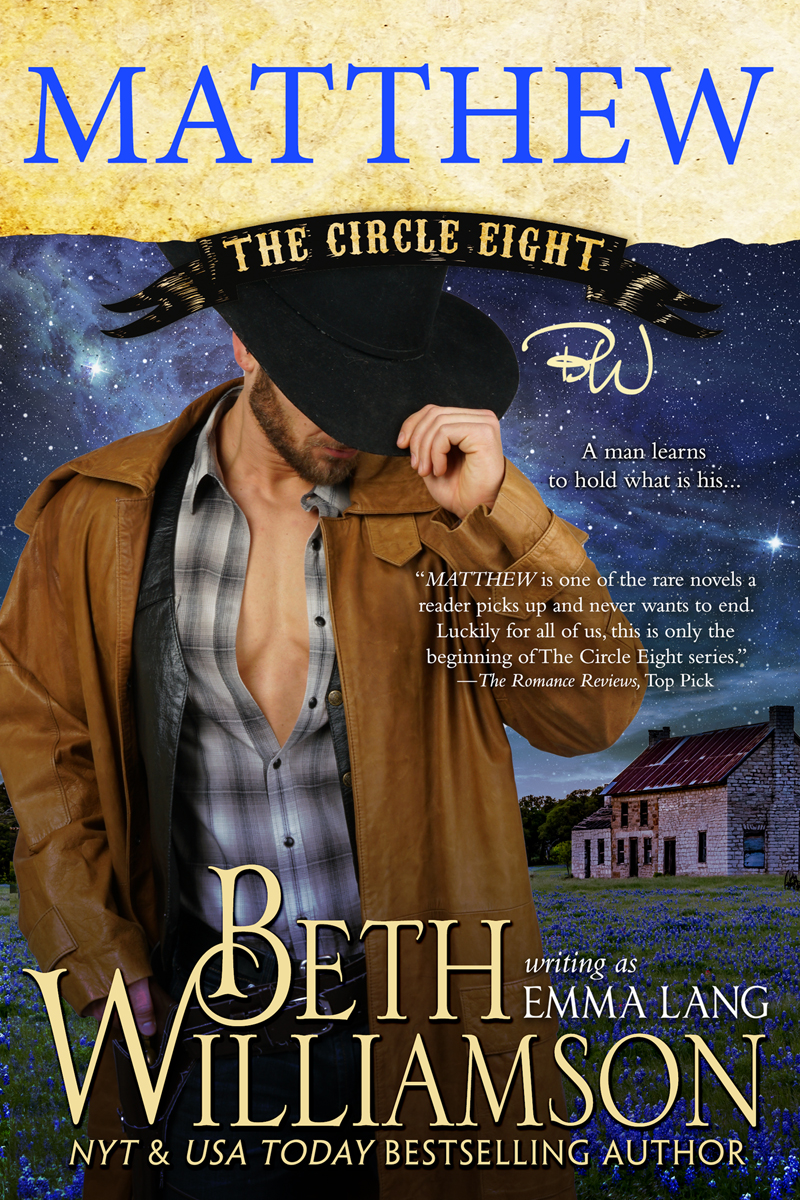 In the wake of his parents’ murder, Matthew Graham must take the reins at the Circle Eight. With one missing brother, and six other siblings looking to him as the eldest to guide them, Matt needs to regain control of his life. He also needs to find a wife in just thirty days, or risk losing it all. Plain but practical, Hannah Foley seems the perfect bride for him until after the wedding night.

Their marriage may make all the sense in the world, but neither one anticipates the jealousies that will result, the treacherous danger they’re walking into, or the wildfire of attraction that will sweep over them, changing their lives forever.

Matt cleared his throat and shuffled his feet as he approached the open door to what he assumed was the kitchen. “Miss Foley?” Complete silence met his words. When he finally stepped into the kitchen, both women were staring at him.

Miss Foley’s face was even redder and the older woman, a gray-haired version of her granddaughter, snickered when she saw him.

“Well, ain’t that a hoot.” She slapped her knee, spilling a bowl of snap peas across the table.

“Granny!” Miss Foley yelled at her grandmother, but kept her gaze on him. He realized in the bright sunlight of the kitchen that her brown eyes weren’t a singular color. They had shades of amber and whiskey in them.

He shook himself mentally to stop forgetting why he was there. Miss Foley didn’t have to be pretty or smart or a good cook, she just had to be willing to marry him. If she happened to be one of those things, well, more’s the better.

Matt took off his hat and nodded at the older woman. “Ma’am my name is Matthew Graham. I’m pleased to make your acquaintance.”

“Just call me Granny, Matthew. Everybody does.” She snorted another laugh, while her granddaughter shot daggers from her eyes.

“Why are you in my kitchen? I mean, I’m sorry, Mr. Graham. I don’t understand why you’re here and I really don’t know why you came into the house.” Her voice sounded all breathy and even huskier. It sent a line of chill bumps down his back.

“If we could sit down, I could explain.” Of course, he didn’t know how he would explain what he was doing. It was a fool’s errand but he was fast running out of time. A month goes by in a blink, and he had less than that now.

“Sit down, child.” Granny pulled out one of the mismatched chairs. “Let the man speak.” She gestured to the other chair and winked at him.

Winked! Oh boy, now he really had to contend with something. Granny obviously thought he was there as a beau. Things just kept getting stickier.

After they all sat, Matt realized just how difficult it would be to explain his situation.

“I don’t know if you knew my parents, Granny, but we own a ranch about an hour outside town. Stuart and Meredith Graham?”

Granny nodded. “I remember them a bit. Nice folks, lots of young’uns.”

She leaned forward and peered at him, the sharpness of her gaze was not lost on him. “Something bad happened back a piece, didn’t it?”

This time he had to swallow the lump in his throat. Twice. “They were murdered and my youngest brother, Benjamin, disappeared.”

“Cryin’ shame that is. Why would anyone kill good folk like that? And steal a boy? Sounds like Injuns to me.” Granny shook her head. “You young’uns are running the ranch then?”

“Yes, ma’am. We have a couple of ranch hands too and our housekeeper, Eva. I’m the oldest so I take care of the business end of things.” He glanced at Miss Foley, who had her hands clasped in her lap, staring at him. “We, uh, that is my father had applied for the land grant from Texas. It’s six thousand acres to every resident.”

“Six thousand? I can’t even imagine how big that is.” The younger woman finally spoke again.

“Miss Foley, it’s nearly as far as the eye can see, and then some. It’s going to make our ranch ten times the size.”

“Hannah.” Her voice had slid down into a near whisper.

“Pardon?” He leaned toward her and got a whiff of her scent again.

“My name is Hannah.” She caught her lip with her teeth. They were straight and white, contrasting sharply with the dark pink of her lips.

“Hannah.” The name fit her perfectly, slightly feminine but strong. “My Pa didn’t have a chance to claim the land grant before he ah, died. I went into Houston to claim it, but it seems there’s a requirement I don’t meet.”

“Spit it out boy.” Granny was obviously not shy.

“I, uh, need to be married. The wording on the land grant means the Graham who claims it must be married.” He let that sink in before speaking again. “While I was in the land grant office, I did something I shouldn’t have and now I’m well and truly stuck between a rock and a hard place.”

“What did you do?” Hannah leaned forward, her whiskey eyes wide.

“I told them I was already married.” He paused and couldn’t even muster up enough spit to swallow. “And that my wife’s name was Hannah.”

The only sound in the room was the burbling of whatever smelled so good on the stove. Granny’s gaze narrowed while Hannah’s gaze just kept getting wider.

“And you’re here because my Hannah isn’t married and you need a wife named Hannah to get your land.” The older woman’s tone was not very warm.

“I didn’t want there to be a misunderstanding why I was here.” He turned to Hannah. “I can offer you a good home, a faithful marriage and a promise to always take care of you the best I can.” There, he’d finally gotten it all out and funny thing was, he didn’t feel any better.

“A-are you asking me to marry you?” Hannah’s mouth was slightly open.

“Yes, yes I am.” He slid off the chair and onto one knee. “I know you don’t know me from the next person. Please don’t say no right away. Take a week to get to know me before you make a decision.” He took her hand, ignoring the rush of lightening that again hit him as soon as they touched. “Please.”

She stared at him, her hand trembling in his. “I, uh.” Hannah glanced at her grandmother while he waited, his stomach somewhere near his throat. “Okay.”

“Okay, you will take a week to get to know me?” Now his voice sounded almost as breathy as hers.