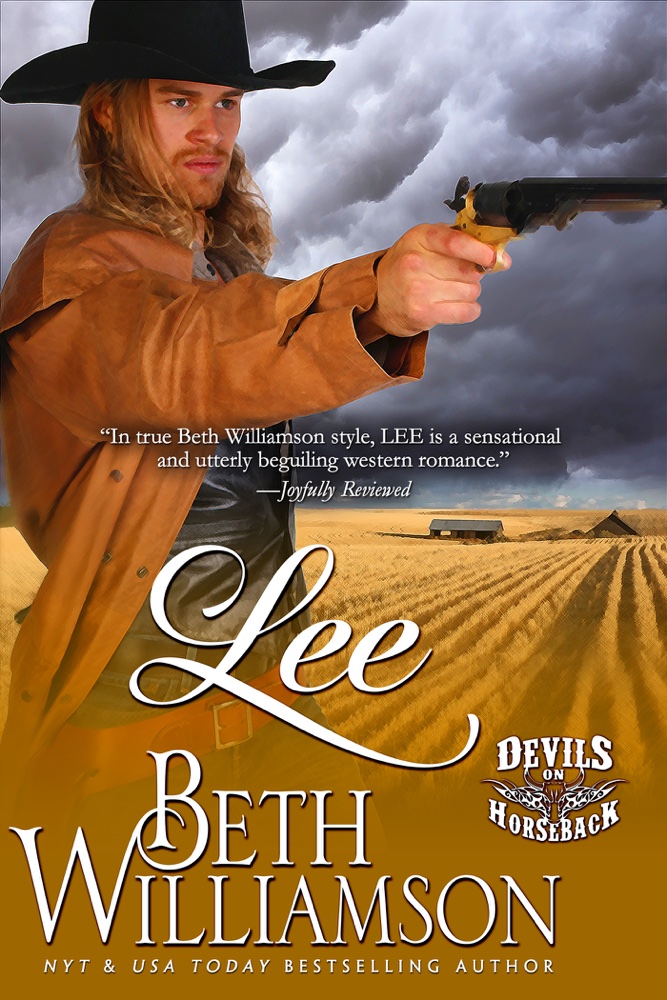 When anger and tenacity collide, sparks are inevitable.

The Civil War took more than Lee Blackwood’s arm. It took his confidence, his pride…and hope that any woman will see him as more than half a man. His friendships helped keep the demons at bay—until now. As each Devil has found happiness, Lee is left alone to cope with the darkness that claws at his soul.

Genevieve Blanchard has only one thing going for her: her no-good late husband’s run-down farm. That, and a fancy name no one can spell might get her a cup full of dirt in Tanger. Room, board and seamstress skills aren’t much, but it’s all she can offer any man willing to help her bring in her wheat crop.

Reluctantly Lee takes on the job, enduring the widow’s smart-mouthed daughter and his growing attraction to a woman who stubbornly refuses to see him as anything less than whole. Slowly, his bitterness begins to fade under the light of their blooming love.

Then the truth of her past threatens to rip away everything: her farm, her child—and the man she loves. But this time, there’s a line of Devils between her and looming disaster.

The woman from the wagon stepped into the mill and Lee turned to face her. He wasn’t sure what he expected, but when she took off her hideous bonnet, her youth surprised him. She was younger than he was.

Her skin was the color of cream with a touch of honey mixed in. A smattering of freckles stood out on her long, thin nose. With reddish brown hair captured in a bun on the back of her head, she was average looking, almost plain. However, she had a forthrightness in her brown gaze that gave him pause. Not many women were able to do that.

“Is Gabby here?” Her voice was like whiskey, husky and throaty with a slight rasp that immediately made the small hairs on his body stand up.

What the hell was that about?

She frowned and tried to peer into the depths of the mill. “Is she coming back soon?”

“I have some business to talk with her about.” She scrunched the bonnet in her hands as she waited for Lee to respond.

He didn’t know why he was being rude. The woman had been polite and it wasn’t her fault that her voice did strange things to him. That didn’t stop him from being an ass, apparently. Lee brought his mother’s face to mind and tried to remember to be a gentleman, at least for his mama’s memory.

“She and Jake went to the doc’s. You can wait for her there.” Now that was a good suggestion. If he were lucky, she’d take it.

“No, I can’t do that. I’ll be right back.” She went back out the door and Lee wondered what she was doing.

When she came back inside with the little girl, he almost choked on his own spit. He wasn’t good around children, never was and likely never would be.

“My daughter and I will wait here for Gabby.”

The girl took after her mother a bit, but in an awkward knobby-kneed, buck-toothed way. Her hair was in two braids, but it was so thick, there were pieces sticking out every which way. She looked around the room, then at him and what was left of his arm.

“Mama, that’s the man who could shoot real good.”

Now the girl had surprised him too. He hadn’t even remembered the shooting contest at the Founder’s Day celebration. Too many things had happened since then, but she obviously remembered him.

The woman’s worried gaze dropped to his hips, likely expecting a gun to be hanging there. He almost snorted at the thought. It had been a long time since he carried a pistol every day.

“Hush. Don’t be rude now.” She nodded at him. “I’m Genevieve Blanchard, and this is my daughter, Sophie.”

Lee stared at her, consistently surprised by how much her voice affected him. If she had decided to be a whore, the men wouldn’t care what she looked like as long as she talked to them in bed. Not only that but she had a fancy French name too. Jesus, it was unnerving.

When she turned away to stand near the door, he realized he hadn’t introduced himself because he’d been staring at the woman like a fool.

Genevieve reached out to shake his hand. “Pleased to meet you, Mr. Blackwood.” Her grip was as strong as expected for a woman who looked like she worked hard.

Lee didn’t know what to make of this woman. She was as plain as prairie grass, but she had bits and pieces that were extraordinary. All of it put together made him want to know more and at the same time, run the other direction.