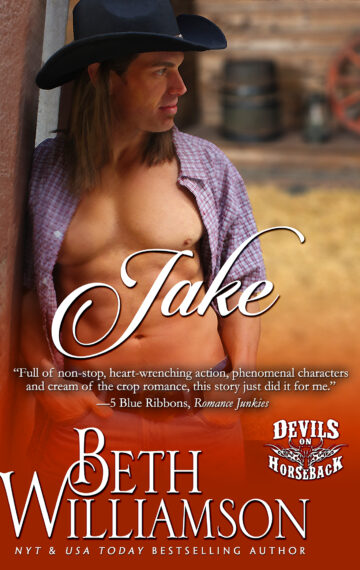 Haunted by war, a thief finds salvation in the arms of an angel.

On the surface, Jake Sheridan is an easygoing man whose problems roll off him like water off a duck’s back. Truth is, Jake holds so many past demons inside him, he daren’t let them out for fear he’ll never get them all back in.

He and the Devils are hired to help rebuild a town ransacked by marauders. Everywhere they turn, they encounter secrets—enough secrets to turn the town to dust if they don’t uncover the truth.

Only one person in town isn’t glad to see them: Gabrielle Rinaldi, the miller’s daughter. A strong and independent woman who is used to being disrespected for speaking her mind, she makes no secret that she doesn’t believe hired guns are the answer to the town’s woes. Yet she finds herself drawn to the enigmatic and charming Jake.

In spite of himself, Jake falls hard and fast for Gabby. But she’s wary of handing her heart to a man who lives by his guns.

When tragedy strikes, Jake and Gabby must fight to find a way to save the town—and their hearts.

Jake found himself fascinated by Gabrielle Rinaldi. Gabby. The way the sun danced across her light olive skin as she sat next to the window, the way she gave Elmer an effusive hug when they came in. She ate with gusto, not like a Southern “lady” who picked at her food. Gabby was all woman, full of life. Jake was drawn to her like a flower to the sun, thirsting for the brightness she gave off.

He kept his eye on Zeke and Allison. She was a shy little thing who barely lifted her eyes and that was only to look at Zeke. He appeared to be equally as taken with the petite woman as she was with him. Jake hoped she was amenable for Zeke to court her, because Jake would bet the two nickels in his pocket it was going to happen. Too bad she was the minister’s daughter, which might put a pinch on a budding romance.

Gabby kept glancing at the blonde couple as well, almost as much as Jake looked at the luscious black-haired beauty. She laughed with her whole body, a hearty laugh that echoed in the empty restaurant. Jake’s heart squeezed each time she smiled. He wanted to kick his own ass for acting like such an idiot, but he couldn’t seem to stop himself. She’d become an addiction so quickly it made his head spin.

“Jake, are you listening to me?” Gideon elbowed him in the ribs.

Jake almost jumped out of the chair. “No, I wasn’t.”

Everyone laughed and he couldn’t help but grin at Gabby. She raised one dark eyebrow and didn’t say a word to him. He couldn’t be certain if she was flirting with him or not, a fact that annoyed and excited him. Women were generally not immune to his charm, as evidenced by the experiences he’d had with the fairer sex. Jake discovered early that making a woman feel beautiful and desired provided a more than pleasant method to getting what he wanted. The truth was, Jake loved women of all shapes and sizes. Each one had her own unique charm and scent. It was one of the first things he noticed as a young, strapping fifteen-year-old in the backroom of the saloon he worked at—the scent of a woman was intoxicating.

Gabby’s scent would be the last thing he remembered and the first thing he thought of each day. She didn’t wear perfume, rather it was a mix of woman, flour, fresh air and her. Fascinating to say the least. Jake sat next to her at the table as they ate the simple ham sandwiches and drank lemonade. Each time she took a drink, Jake watched, and hungered.

He wanted to taste her lips, feel her tongue on his as they shared the tart flavor left in her mouth. Jake shifted on the chair, realizing his usually calm dick had woken with a vengeance and strained at the buttons of his trousers. He needed to stop fantasizing about Gabby and work on charming her, because judging by the frown on her face when she glanced at him, he had a ways to go.