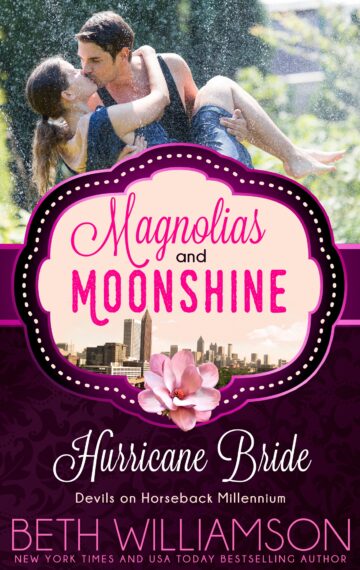 Get caught up in the storm.

When a hurricane forces uptight Claire Blackwood’s life into a tailspin, she never expects to find her true north again. An opportunity to get back on her feet lands her at the Peach Bellini B&B and sharing a cottage with a man who makes her feel again.

Boyd Rowe lives life as it comes to him and sharing a house with her is the most difficult thing he’s ever done. The tightly wound woman makes him crazy at the same time makes him long for something else. The runaway hurricane bride is just the storm he needs.

Claire undressed slowly, every muscle in her body aching from bone-deep exhaustion. It wasn’t the work she’d done making meals and helping guests. No, it was the emotional exhaustion of the last week. She’d been blowing in the breeze like a plastic bag on the highway, bruised and battered from the journey.

Now she had a place to sleep, people who were kind and generous, and a chance to reset. She’d begun to fall for the charm of the Peach Bellini. The night creatures had sung a full symphony as she walked toward the cottage at nine.

As she pulled on her robe, she yawned so hard, her jaw cracked. A hot shower and she was going to collapse into that fluffy bed. As she walked out of her bedroom, the bathroom door opened. She stopped mid-stride, too shocked to do anything but stare, her travel tote and towel dangling from her hand.

Boyd walked out wearing only a navy blue towel. Water clung to every sculpted inch of him. Droplets clung to his dark hair, which curled when wet. He turned to smile and all the air whooshed out of her.

“Hey, roomie. Shower’s all yours.” He walked down the hallway with a lean hipped swagger and walked into the second bedroom she hadn’t even realized was there.

She was sharing the house with Boyd? Why hadn’t Pearl mentioned it? Claire’s entire body flushed with heat. She was expected to use a shower after Boyd had been in there naked? Her exhaustion turned into something completely different. Annoyance, disappointment, and a whiff of arousal.

Claire stood in the hallway for an indeterminate amount of time before she took a step toward the bathroom. No matter what, she couldn’t stay in the house forever without showering. There was nothing she could do it about it tonight. She could be practical and just make do for now.

Tomorrow she could talk to Pearl about different accommodations. There were certainly guest rooms in the house. For paying guests, of which she wasn’t. Hell, she didn’t think she could afford even one night at the bed and breakfast.

Resigned but resentful, she entered the bathroom. The air held warm moisture, the mirror fogged from the previous occupant. She closed the door and readied herself for a shower.

She couldn’t think about the fact Boyd had just been naked here. The man was a fellow employee, and she wanted nothing to do with him. The arousal she’d felt was temporary insanity caused by the emotional storm she’d just emerged from.

Claire didn’t realize she was humming until she heard the music. She found a smile when she recognized “Yellow Rose of Texas”. Her mother used to sing that when she hung laundry on the line. She had a clothes dryer but she preferred the smell of outdoors on the sheets and towels.

When the words came from her mouth, she forgot everything but the longing for her family and for home. An ache spread in her chest that reminded her she was alone in Atlanta. Pearl and Manny were wonderful of course but they weren’t her brother and sisters, or her mother and father.

She sang to them, to herself, to the universe, letting her emotions free for the first time in a long time. The water became lukewarm, so she turned it off and pressed her forehead to the tile. Although she’d been full of homesickness, the song and the shower surprisingly had made her feel better.

After toweling off, she put on her robe and brushed her teeth. When she opened the door, she peered out, but Boyd’s door was closed. She went back to her room and towel dried her hair until it was only damp, then put on a T-shirt and shorts. The exhaustion she’d felt half an hour earlier had dissipated. She was too wound up to sleep. Perhaps she’d get online and balance her checkbook.

When the knock sounded on the door, she started. “Who is it?”

“It’s Boyd. I made some hot chocolate. Do you want some?”

She cracked open the door and peered out. Boyd wore only a pair of shorts, revealing a jaw-dropping chest covered with slabs of muscle and whorls of dark hair. The man was ridiculously ripped.

He shrugged. “Chocolate helps me sleep.” He held up a mug with, of course, a peach painted on it. “I’m going to watch TV. You’re welcome to join me.”

“Then you need the chocolate.” He handed her the mug and walked back toward the living room.

She stared at the steaming cup. He’d put mini marshmallows in it. Claire had a choice. She could mope in her room, or go hang out with her new roommate. Self-pity, or hot chocolate and TV?