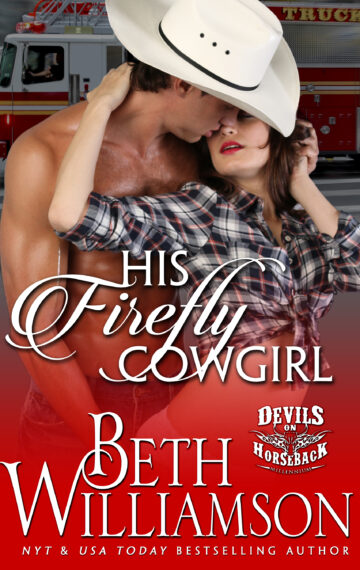 Rejoin the Devils for a contemporary series with the Blackwoods of the new millennium.

Dax Blackwood had more than his share of troubles and then she returns to Tanger, Texas, to set his world on its ear. Sophie Evans didn’t plan to ever return to the town she grew up in, but when a suspicious fire destroys a town landmark, she’s assigned to investigate as a state fire marshal.

Sparks threaten to flare out of control when this cowboy meets his firefly cowgirl once again.

Dax Blackwood stared at the charred remains of Cindy’s Restaurant. He could hardly believe it was gone. It had been owned and operated by his family for generations, since just after the Civil War.

Now it was nothing but an eyesore. It had been a week since the fire but the ashes were still warm. The damn thing went up so fast the volunteer fire department had little chance to stop the blaze. They were able to keep the fire from jumping to nearby buildings, thank God.

As fire chief, it was his job to meet with the investigator from the insurance company at the site. The dude was late and it was damn hot. Scorching heat close to a hundred degrees, if he had to guess.

He took off his hat and wiped his sleeve across his forehead. If the investigator didn’t arrive soon, he’d get on back home and get some chores done. Or maybe have a beer with his dog, Kona.

It was a typical afternoon in sleepy Tanger. The town had maintained its small size despite the massive growth in East Texas. Likely because it was ten miles from the closest highway, not near enough to attract the attention of any of the big chain stores.

In Dax’s mind, that was a good thing. He liked small-town life and had no need to move onto bigger and better things. Unlike some folks, Tanger would remain his home for the rest of his life.

He peered at his watch. It was half past three. The investigator was a full thirty minutes late. That was the end of Dax’s patience. He had too much stress already to wait around for more. Although going home brought him even more stress. His sister Hannah had moved out to the ranch after the restaurant burned. Now she was making him crazy as shit with trying to fix up the house and straighten up everything she saw. Dax didn’t need his house or his life fixed.

He mashed his hat back on his head and spun on his heel to return to his truck. A blue sedan pulled in, stopping him in his tracks. His temper was slow to boil, but waiting in the heat had stirred him up.

The son of a bitch sat in the car, in the air conditioning, something his ratty ride didn’t have, and fiddled with his papers.

Dax stomped over and yanked the door open. “Look, mister, I got shit to do. Get your ass out here and let’s get this over with.”

The person who emerged from the car was not a middle-aged man with a receding hairline and a paunch. Far from it. A woman with mahogany hair, eyes deeper than the blackest night sky, skin covered with freckles and a pair of turquoise glasses perched on her perfect nose.

She pushed up the glasses. “Hi, Dax. My ass is out of the car, as ordered.” Her perfect mouth twisted.

“Don’t tell me you’re the investigator I’ve been waiting for.”

“I won’t tell you since you seem to already know.” She tapped the screen on the tablet in her hand. “Care to join me?” With that, she slammed the car door and walked toward Cindy’s.

Son of a bitch. Sophie Evans. What kind of universe made his ex-girlfriend the fire investigator he had to work with? The last time he’d seen her had been five years earlier, when she left Tanger for Houston. Left him for bigger and better things.

Now she was back.