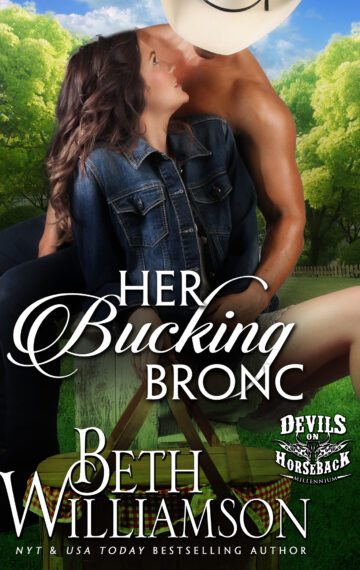 Hannah Blackwood cannot get around her own grief. After losing her fiancee, she wallows in self-pity, stuck in an endless cycle of sadness. While her family’s ranch business thrives, she throws herself into rebuilding the restaurant she ran before it burned to the ground. What she doesn’t expect is for the general contractor to throw a monkey wrench into her plans.

A general contractor and part-time cowboy, Dylan Bennett has a reputation as a hard-ass. He likes things done his way and his client, Hannah, is too stubborn by half. He doesn’t want to fall for her, but every argument flames the fire of attraction deep within him.

They need to find a way to let go of their pasts and wrangle their way into a future together.

“Who is the complete idiot who designed this?” The man’s voice was a harsh whisper in the evening air. The charred remnants of the restaurant were supposed to be empty, but obviously, they weren’t.

Annoyance threaded up Hannah Blackwood’s back. Someone was on her property screwing with her building. Or what was left of it after it’d burned. There was a partial wall in the back that was to be removed tomorrow.

The stranger was there on a Sunday night after the sun went down. And no one, not even her brother Dax, was supposed to be on site. This was Hannah’s project. If one of her cousins was there sticking his nose in her business, she would whoop his ass.

It was bad enough Dax kept looking at her with pity every damn morning. The fire wasn’t her fault, for pity’s sake. Some bastard had burned it down, but the restaurant would be rebuilt. Life would go on. Blah blah blah. She was done hearing his platitudes. In fact, she was done with everything, including the asshole that was tromping around her property.

She pulled the gun from the hidden pocket in her purse then slung the leather bag crossbody to keep both hands free. As had become her habit of late, her brown hair was up in a ponytail, although she couldn’t remember if she’d brushed it that morning.

The .380 fit nicely in her hands as she crept forward. The orange-red splashes of the sunset made it difficult to see clearly. She waited for the man to speak again, but all was quiet.

Hannah would be pissed if the man were gone. She was jonesing for a fight with someone. Since Dax and his girlfriend, Sophie, were being so nice to her, she couldn’t let loose on them. Besides, they assumed she was sad and forlorn. They had no idea the volcano that burbled beneath the surface, ready to explode all over somebody.

A tall figure rose in front of her and she smiled, her grip tightening on the gun. She widened her stance, then paused for a moment to appreciate the man’s beefy shoulders and back below the shadow of his cowboy hat, before she cleared her throat and spoke.

“You have about five seconds to explain why you’re trespassing on my property before I put a new hole in your head.” She was pleased by how firm her voice sounded, although her heart was slamming against her ribs. No matter how much she practiced with a weapon, she’d never shot a person before. He was much bigger than a paper target.

The man stopped in the middle of reaching for his pocket. “Your property?” The fool had the nerve to sound annoyed.

“Yeah, my property. Who the hell are you?” Now that the anger had been unleashed she couldn’t stuff it back inside. After two years of cramming it back down her throat, she burned with self-righteous fury.

“Dylan Bennett.” He pointed to his chest. “I have my business card in my shirt pocket.”

Hannah could either let him reach for the card and possibly risk her life if he had a gun to grab, or she could get the card herself. She opted for neither and tightened her grip on the gun.

“What are you doing here, Dylan Bennett?”

“I’m supposed to be meeting the owner, Harry Blackwood. I’m the general contractor he hired to rebuild the restaurant.” He sounded so damn believable.

“Harry, huh? Nice try, dude.” She shook her head. “There hasn’t been a Harry Blackwood in a hundred years.”

A sharp sigh exploded out of him. “Who are you? And should I call the police because you’re holding a gun on me?”

“You’re welcome to. My cousin Kyle is the deputy on duty.”

“Shit.” He put his hands on his hips. “I’m done playing games, lady.” He turned around and she took a step backwards.

Hannah’s breath rushed out of her body so fast, she felt dizzy. The man was spectacular looking. He had longish sandy brown hair hanging to his collar, curling at the ends. His light blue eyes were topped with short lashes while his nose was long and patrician. A strong jaw was clean-shaven, not dotted with the scruff that was the “in” thing as of late. Nothing boyish about this cowboy. He was tough and chiseled.

It had been a long time since she’d had a visceral reaction when she caught sight of a man. She could appreciate a good-looking man, but none of them moved her. Hell, nothing had moved her in two years. Not since her world ended and her grief took over her life.

And she had to be attracted to this man? This idiot who couldn’t even get her name right?