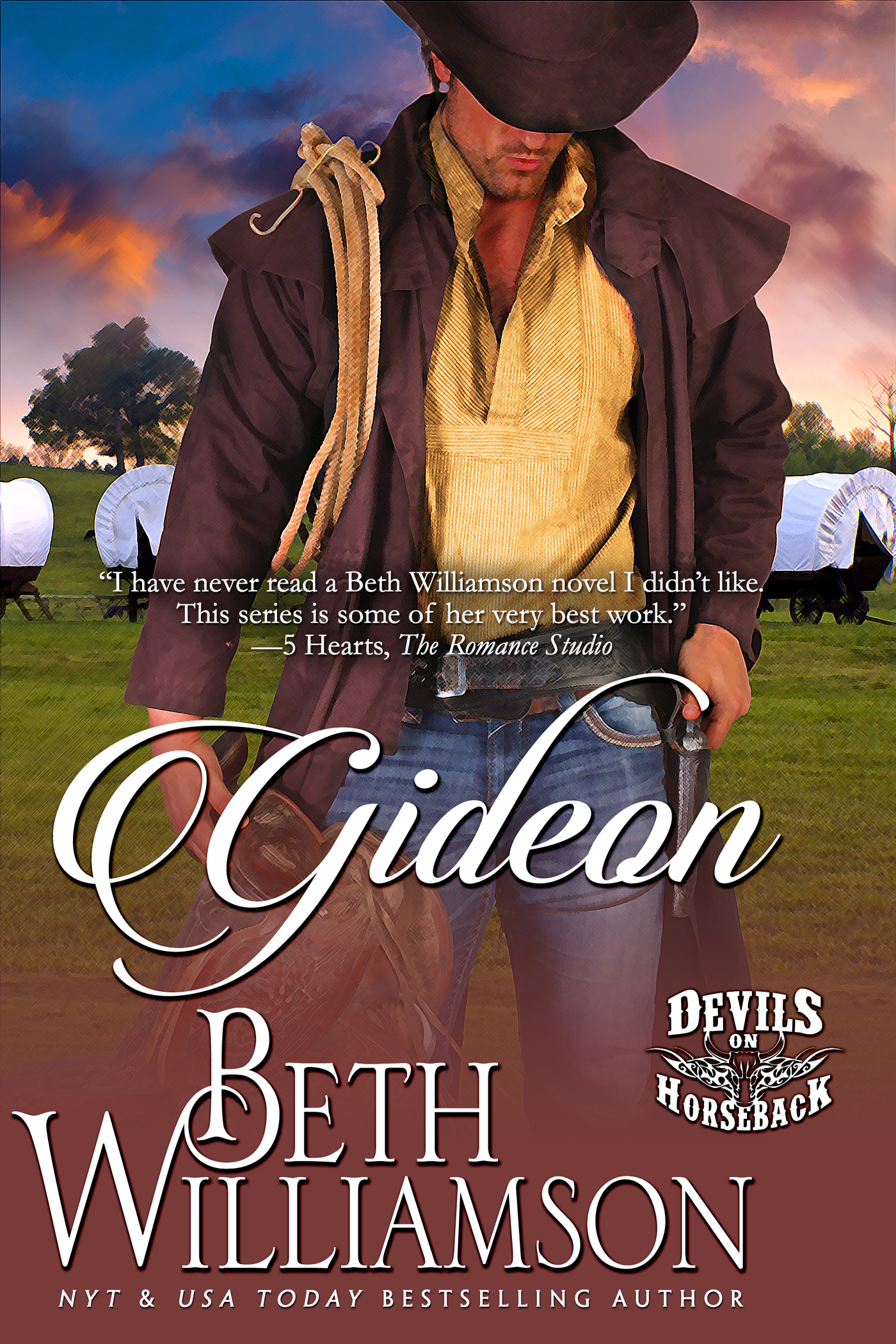 Gideon Blackwood is on the run—from Tanger’s meddling matchmakers. With no intention of following the rest of the Devils down the aisle, he heads for the hills to reassess a life spent leading and caring for others…and runs smack into the business end of a shotgun. At the trigger: a curmudgeonly woman with a broken axle and a load of responsibility.

In Chloe Ruskin’s experience, men take what they want and leave a mess of trouble behind. The safety of two orphans and her granny is at stake, and the last thing she needs is Gideon’s “help”. This time, though, she has no choice but to allow the big cowboy to fix her wagon.

As they work into the night, grudging admiration grows into attraction—and desire. Gideon finds he can’t dig his boot heels in hard enough to avoid falling for the opinionated little female.

When Chloe’s family disappears, her suspicion threatens to destroy any spark of love before it catches fire. Gideon finds himself making promises his pride won’t let him break—even if it costs him the love of the woman who owns the missing half of his soul.

Chloe tried not to notice the size of the muscles clearly defined beneath the dark blue shirt the man wore, but holy hell, it was hard not to. She was only as tall as his shoulder, and with the tree up on top of it, he was larger than life. Her blood thumped through her veins, reverberating within her as though she was a plucked string.

As he looked expectantly at Chloe, a shiver snaked down her spine although it was a warm, sunny day. She was no fool—she knew that people were like any other kind of animals and were attracted to each other. It had happened to her with a few boys back in Virginia, but there weren’t many around when she was old enough to want to get hitched. Those who came back had too many ghosts in their eyes and too many troubles of their own.

If this stranger had ghosts, they were well hidden behind his annoyed expression. He scowled at her. “Ma’am?”

Oh Lord, she’d been staring at him. Chloe wanted to slap her forehead, but instead she scowled back at him. “That all you need?”

He gestured behind her. “No, I need that big rock right there too. It’ll be easier if we use a fulcrum to leverage it up.”

Chloe didn’t know what a fulcrum was, but the rock was bigger than she and Granny put together. “How are you going to move that?”

“Oh. That makes sense.” She peered at him. “What are you waiting for, then?”

“You are a prickly little thing, aren’t you?” His brows drew even closer together. “I’m not standing here with this thing on my shoulder because I wanted splinters.”

She swallowed the chuckle that threatened. “Then let’s get to it.”

He turned and walked to the wagon, setting the branch down. Chloe moved to the rock and started digging to loosen the soil around it. She didn’t get very far before he nudged her out of the way and yanked the damn thing out of the ground. Dirt clods flew every which way, sending her scrambling backward to wipe her eyes and face.

Chloe sputtered and wanted to tell him exactly what he could do with the rock instead of rolling it to the wagon. By the time she got all the muck out of her face and eyes, he had set the rock beneath the wagon and put the branch on it.

“What are you doing?”

“Testing the branch to be sure it’s strong enough.”

“You’re going to lift up the wagon.”

“Therein lies the way to take off the broken wheel.”