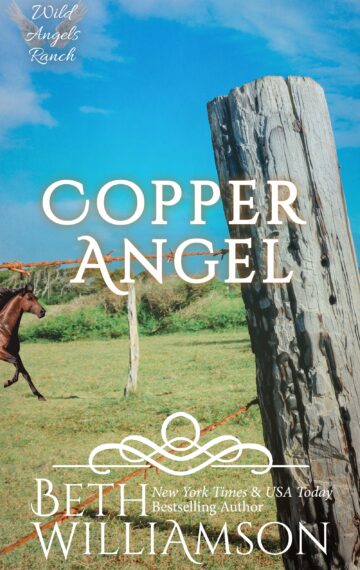 Margaret “Meg” Delany fled her native Virginia with nothing but a battered valise to start life anew in Texas. When her money runs out before her final destination, she finds herself in Nowhere, Texas. Only the kindness of a woman named Jolene Duffy saves her from sinking into a life of desperation.

Sheriff Malachi Walker is leery of the redhead and the timing of her arrival at the Wild Angels ranch with Jolene. Someone is committing heinous acts against the older woman and he’s determined to find the guilty party. His attraction to her is distracting and unwelcome, but he’s helpless to resist it.

As the crimes escalate, the ranch that was formed to help women becomes awash in blood as cattle are slaughtered. Malachi and Meg work together to find the culprits. Along the way, their attraction grows deeper as the danger around them threatens everything they hold dear.

“I don’t know ya, girl, but you sure look like you need a little help.”

The woman’s voice was laced with amusement and concern, a strange combination. Meg slowly turned to look. If this was Jolene, she was not anything what Meg thought a madam would look like. About Meg’s height, she wore a blue chambray shirt with a yellow kerchief tied around her neck. She also wore brown trousers on her bowed legs with a pair of dusty, pointy-toed boots on her feet. An equally dusty brown flat brimmed hat topped her steel gray curls.

Her skin was as weathered as her boots, creased from life and likely too much time in the sun and wind. Her eyes were the same color as her shirt. The older woman smiled.

“You get your fill of looking?”

“Pardon me?” Meg was startled to realize she had been staring.

“Jessup told me you’d been sitting here for a couple hours now. Something about a commotion earlier with the sheriff.” The stranger gestured to the bench beside Meg. “Can I sit?”

“It’s a public place. You’ve every right to rest as well.” Meg shrugged, not nearly as casual as she pretended to be.

After she sat down, the old woman pulled a cigar from her shirt pocket along with a match. She bit the end off the cigar, spit it toward the ground, then struck the match on the bottom of her boot. As she held the flame to the end of the cigar, the smell of the tobacco wafted in the air.

“Hope you don’t mind if I smoke.” She puffed on the cigar in the deepening evening air. The silence was awkward, rife with unspoken questions. “Name’s Jolene Duffy.”

“You don’t look like a madam,” burst from Meg’s mouth before she could stuff the words back down her throat. To her relief, Jolene burst out laughing, her husky tones of mirth diffusing some of the tension.

“A madam? I ain’t heard that one before.” Jolene slapped her knee. “Wait until I tell the girls.”

“I don’t understand. Who are you?” Meg was embarrassed but curious.

“Why don’t we go get some chow at Callahan’s restaurant? You look like a deer after a long, hard winter, skinny enough to blow over in a stiff wind.” Jolene puffed on the cigar again. “I’m buying before you tell me no.”

Meg had little options and a free meal would be better than none. She didn’t know who this woman was but she didn’t appear to be a madam inviting Meg to her brothel.

“I accept your offer.” Meg got to her feet and the world tilted. Jolene was there in an instant, her strong hand beneath Meg’s elbow. Bless her heart, the older woman didn’t mention Meg’s weakness, whether it was from sitting for days on end or from lack of food.

“Callahan’s has good coffee and vittles. Let’s head on down to eat.” The older woman picked up the battered valise and led Meg off the platform. Jolene appeared to be someone who was used to being in charge. Right about then, Meg didn’t care. She was looking forward to food and coffee. It had been some time since she’d enjoyed a cup of the bitter brew. Although it wasn’t ladylike, she very much enjoyed coffee.

The streets of Nowhere were a mixture of dirt and old wood planks, mixed with some newer boards. The buildings were also a strange blend of old, new, and odd. Meg watched and listened to everything but spoke to no one. Jolene greeted a few folks and then they were in the restaurant sitting down.

“Coffee for both of us, Bonnie.” Jolene nodded to the blonde waitress who approached them. “Plenty of sugar too.”

Meg’s mouth watered in anticipation. She ought to refuse the charity but that was her pride talking. The woman was buying her a meal, Meg wouldn’t be rude. Within a minute, a steaming mug of coffee was in front of her on the table. Jolene stirred in a heaping spoonful of sugar and pushed the mug toward her.

The warmth of the hot brew went through ceramic into her cold fingers. Meg sipped at the coffee and shivered with pleasure. As it slid down her throat, she already felt better. Coffee was a luxury she sorely missed.

“Steak plates for two.” Jolene ordered dinner from the waitress. Bonnie eyed Meg with interest but didn’t ask any questions.

“You know my name. Do you want to gimme yours?” Jolene slurped at her coffee.

“Pleased to meetcha.” Jolene’s blue gaze was as sharp as a knife. For the next several minutes they sipped and swallowed in awkward silence. Bonnie returned with their plates heaping with food. Margaret wondered if Jolene would be offended if she licked the plate clean after she’d eaten every bite.

“You look like you could use a hand, so you’re welcome to come home with me and stay the night or for as long as you like. I own the Wild Angels Ranch.”

Meg didn’t know what to say.  “It sounds like a lovely place, Miss Duffy, but I–“

“Before you tell me no, let’s eat up before it gets cold. Can’t make a good decision on an empty belly.” Jolene dug into her meal with enthusiasm.

Jolene’s invitation was sudden and unusual. Folks didn’t usually trust strangers, especially since the war ended. Meg wasn’t one to trust anyone, no matter how nice they were. She wished it wasn’t so, but life had taught her to be suspicious. The older woman had been very kind to Meg since they’d met a short time ago. No matter how mistrustful Meg was, she had very little choice. She could sleep on the bench at the depot or she put her faith in the kindness of a stranger.

Neither one was a palatable option.