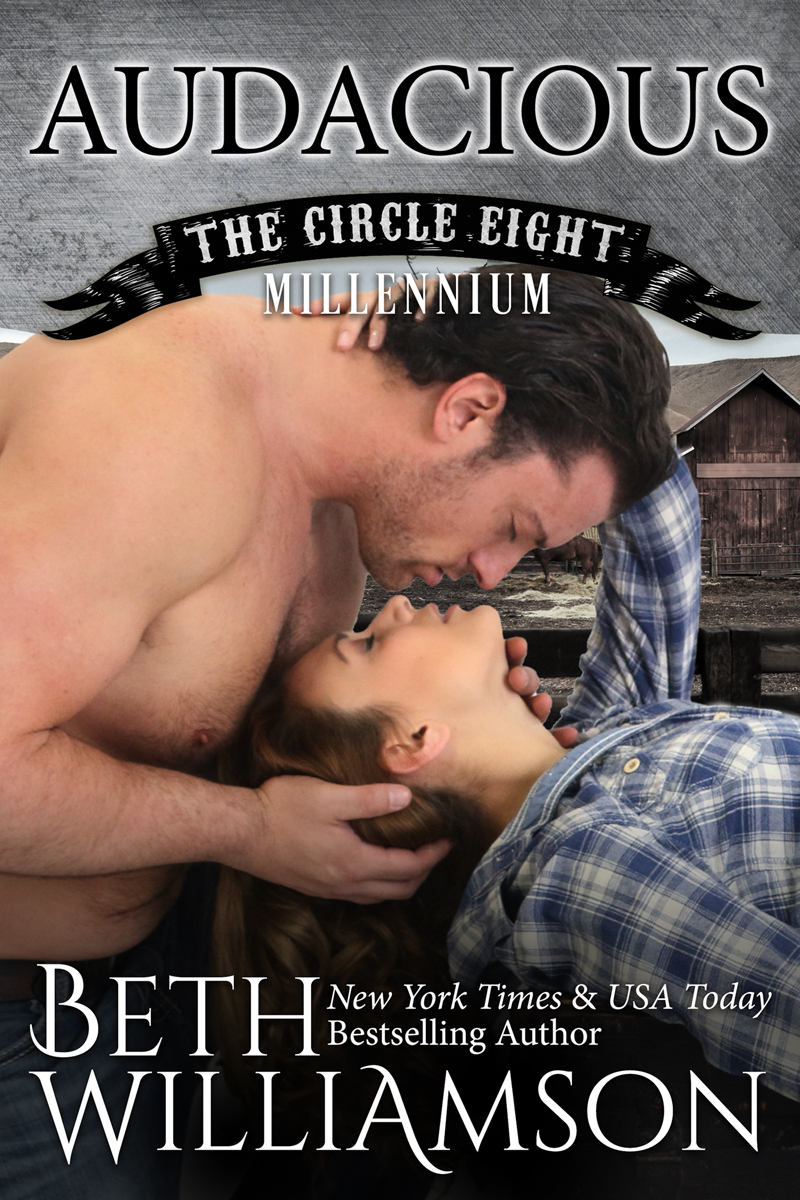 Veronica “Ronnie” Graham had always been called Audacious. She spent her teenage years out of control and at the age of twenty-six, is a single mother and struggles to find a better life for her son. She lives day to day and dreams of a future where she can stop being afraid of failing.

Jack Reilly shed his former life, and the responsibilities of his parents’ fortune, to hide out in small town Texas. He’s not expecting to tangle with a fiery redhead but once he does, he can’t stay away.

Two lost souls find an unlikely connection and the promise of more than a life alone. Together they have to let go of who they were, and embrace who they could be.

Jack had dated a number of women in his life. Most of who were classically beautiful. This feisty waitress had nothing in common with the females he’d been surrounded by.

“Who or what is Audacious?”

“Me. I have a dark and shady reputation and my nickname in town is Audacious. It’s like a giant shadow I’ll never be able to outrun.” She shrugged, but her tone told him the name bothered her.

“I have a dark and shady past, too, so that makes two of us.”

He watched as she leaned down to examine the tiled countertop. She wrinkled her nose.

“I can’t imagine how much bacteria has lived and died on this thing over the last hundred years.” She straightened and pursed her lips. “Were you looking at my ass?”

“Nothing, just be sure look is all you do.” She shrugged. “I don’t take shit from anyone.”

“Don’t be a smart ass. I’m not a fan.” She walked farther into the house. “This is a massive house for one person.” She whirled around to spear him with a gaze. “Unless you have a hidden family somewhere.”

The mention of family made his heart pinch. “No, no family. No one but me.”

“Sometimes I wish I didn’t have my family, such as it is, but if I didn’t, then I wouldn’t have Ace. Because I think we’re a product of where and who we come from, y’know?” Who knew this curvy, outspoken woman was such a philosopher? She continued to surprise him with every sentence that fell out of her mouth.

A mouth that, he was disconcerted to notice, was blessed with plump lips and a nice set of teeth, although one front tooth was cocked to the side just a bit. It gave her mouth character, not that she needed it. The woman might not be model beautiful, but she ignited a slow burn in his dick, making it twitch with interest.

He blinked at her question, nonplussed by the images that raced through his mind. “Pardon?”

She crossed her arms. “I’m supposed to be working off my son’s debt, remember? What do you want me to do?”

He was brain dead for several seconds before he remembered that he’d planned for her and her son to be there. He’d prepared the soapy water for the windows for the kid. For her, however, he had a different chore.

“Come upstairs with me.” He turned and walked up the back staircase. It was obviously narrower and meant for the servants that had undoubtedly lived here at some point. The second floor had five bedrooms of varying sizes. The largest, which had blue, flocked wallpaper, he had set up a temporary bedroom to rest his bones in. The one next door was much more feminine with wallpaper that had tiny faded roses.

Within this room was a beautiful rosewood armoire he wanted to restore. He opened the doors and stood back. She stepped into the room at a slow speed and looked both ways before she appeared to satisfy herself no one was waiting to attack her.

“This is what I want you to do.” He pointed to the armoire.

She frowned and the now familiar crease appeared between her eyes. “What’s in there?”

When Jack had discovered the treasure trove of clothes, he knew he couldn’t simply throw them away. There were dresses from the nineteen twenties and thirties and, if he wasn’t mistaken, something from the World War I era. They were filthy with dust and yellowed with age.

She peered into the armoire, and a genuine smile lit her face. It transformed her from the hard woman she showed the world to someone completely different.

“These are amazing.” She caressed the lace cuffs and the delicate stitches in the bodice of a purple dress. Her fingers were long and elegant and made him think of things other than old dresses. Jack was attracted to her, more than that, turned the hell on by her.